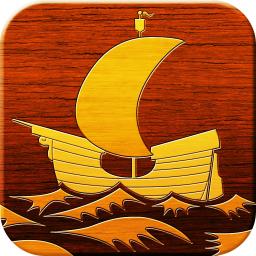 "Medieval Merchants is this young year's discovery for us."
- Article on apptalk.de

"David: A lot of developers are entering into freemium models, but we decided not to. Were going into flat rate gaming: Pay once and play as long as you want to because we believe a gamer doesnt want to pay for every single step in a game. He or she should enjoy the gameplay, the story and have fun while playing, not paying."
- Developer Interview on phonerpt.com

"Things are fixin to get Hanseatic up in here: Deutsch devs Rapidrabbit have been in touch about their forthcoming trading simulation Medieval Merchants. (...) Trading simulations are yet another I cant believe no ones made one of these yet genres on iOS."
- Article on pockettactics.com

Do you have what it takes to become one of the mightiest merchants of the Hanseatic League? Prove your trading skills in this multi-device trading simulation which is one of its kind on the App Store.

Discover the Hanseatic League of the 14th century and fight for gold and prestige - transition-free on your iPad and your Mac.

Take on the role of a medieval merchant and allow the City of Lübeck to rise from a little fishing village to the most important trading center of Northern Europe.

Build ships, sail the Baltic and the North Sea and compete for valuable trade goods throughout the Hanseatic League. Invest money and resources in the City of Lübeck and become its mayor - but only if your competitors aren‘t faster.

SHOW YOUR SKILLS AS A SINGLE PLAYER OR COMPETE AGAINST OTHERS
If you like to play against the computer, the extensive singleplayer mode will guide you through the historic development of the Hanseatic League with a character driven story. You prefer to compete with other players? Here you go: In the multiplayer mode you can go for the gold against up to three fellow players.

CLAP ON YOUR SAILS - AT HOME OR ON THE GO
With the help of a fresh technology, taking advantage of Apple's latest OS Mountain Lion, you can play Medieval Merchants not only on your iPad but also on your Mac – transition-free with iCloud and Game Center support. That way you can fight against pirates and competitors from anywhere. And if you have to manage battles in your daily life, just save your score on one device and continue the game on another one.