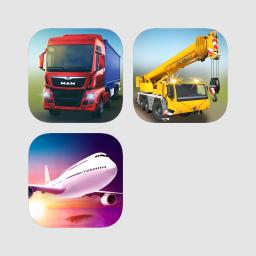 This Simulator Bundle contains our most popular simulators. Get behind the wheel of 14 faithfully reproduced construction machines in Construction Simulator 2014 and build houses and industrial buildings. Drive 9 heavy trucks across Central Europe in TruckSimulation16 and fly over 20 aircraft around the world in Take Off - The Flight Simulator.

Take Off – The Flight Simulator

dnreviews.net: “Aviation fans will be delighted: Take Off – The Flight Simulator is game entirely to their tastes.”

First this games are not very good it's just game with no graphics and no idea just waste of your time and flight simulator doesn't work on my device why ??? And i pay money on it don't buy this bundle and don't play it and don't waste your time and your money on this,so I don't like it and I don't …