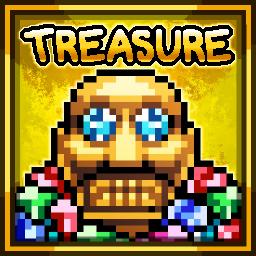 Idle gameplay, where your choices matter -- will you specialize in Mining Godshards, or become a prolific Farmer and harvest Ambrosia Berries until the cows come home?

Be warned, this game is intense! It will take a while to learn, but has MONTHS of gameplay waiting for those who play!

With Idle Skilling, you get to do the following:

- Fight monsters, through increasingly difficult regions, from the Desert to the Lunar Isle!
- Craft items, from Golden Axes to Ethereal Orbs!
- Face the 8 Realm Bosses, like the Defiled King and the Headless Entertainer
- Plant 20 crop types, and grow 24 flower types, using these ingredients to brew 100+ unique potions!
- Breed 60 pets, build pet Teams, and research 45 unique Lab Tanks!
- Hire Miners and Fishermen to gather resources needed for expanding your game, in order to reach new areas and hire different Workers!
- Complete 254 unique quests, earning Merits used to buy unique upgrades!
- Ascend / Rebirth mechanics will let you reset the game for game-changing bonuses!
- For you big brain players, there are 5 secret areas that you can only reach by figuring out hidden puzzles (or by looking them up on the wiki lol)

... I could say more, like the 60 different perks across 7 different Trees, or the you get the idea, there is a lot to do in Idle Skilling!

If you love leveling up, this will be your next favorite Idle game! Level up your Attack, mining, fishing, crafting, and more, while casting spells and upgrading skill trees! Everything levels up in the background -- 100% idle gameplay!

Want to be a part of the community? Join the Verified discord, we have over 11,000 active members!
https://discord.gg/IdleSkilling

Idle your way to the top!
-The game plays itself, whether you have it open or not!
-Offline progress, so you can level up while you sleep!

Upgradeable Characters and Perks
-Upgrade 20+ Idle Skilling heroes on your journey to reach Max Stats!
-Each hero gives its own unique EXP!
-Attack, Strength, Health, Mining, Smithing, and Fishing!
-A diverse skill tree with 30 unique perks to spend your Skill Points on!

Craft Items with the Smithing Skill
-Forge 80 unique Items and trinkets to help you in battle!
-Each Item can be upgraded 1000s of times!
-Create awesome Food Recipes to use in Battle!

New Game+
-Reset your game to earn Relic Bonuses! These last forever, and change up the game!

New Game++
-Reset your Relic Bonuses for Dimensional Abilities, which grant insane powers to take you even further on your journey!

And other cool stuff that didn't fit in the above criteria
-Complete quests in secret areas! These areas are very tricky to find!
-A basketball minigame, which rewards you free goodies every day!
-Over 300 quests to complete, ranging from Defeating Bosses in a small amount of time, to reaching the Desert without crafting items!
-Tons of future updates from a developer who cares about his game <3

There are also SECRET hidden areas to uncover, but only the smartest players will figure out how to access them! In these areas you can talk to NPCs and fulfill their quests, earning you amazing bonuses that are otherwise not possible to get!

This game was made by a developer who really put his all into making an enjoyable experience. So if you like the game and want to help make it better, feel free to reach out to me and give me your suggestions! Many of the best features are a result of player feedback, so I'd love to hear what you have in mind!

Such a good idle game. Dude. More people should play this game.

Everytime I try to open the game it instantly closes

It won’t even open