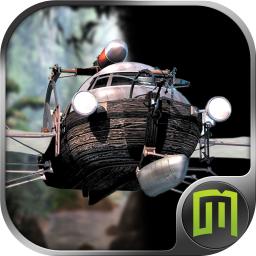 Before dying, the explorer Emile Valembois tells you about the most amazing expedition of his career. This expedition was dedicated to the crazy "white bird" mystery.
The first masterpiece of Benoit Sokal's adventure game

THE ADVENTURE
Before dying, the explorer Emile Valembois tells you about the most amazing expedition of his career. This expedition was dedicated to the crazy "white bird" mystery. He confides to the young journalist that you are, the odd mission of returning to Amzerone in order to bring back an egg that was robbed 50 years earlier…
Legend has it that strange white birds are born and die in mid-flight, without ever landing. To bring this species back to life, you'll travel through enchanting landscapes, from Brittany to tropical forest. You'll have to solve the mystery of these famous white birds…
You are suddenly transformed from journalist to explorer setting out for the Amerzone, chasing down any clues that Alexandre Valembois left you in his lighthouse.

THE GAME
A Point&Click adventure using 360° vision technology in every scene.
The game is not a copycat portage of the PC version but an adaptation for touch screens and mobile platforms.

THE HIGHLIGHTS
• The first adventure from the author of Syberia and Syberia 2, Benoît Sokal
• The fascinating treasure trail laid out in Valembois' notebooks
• High-definition graphics and cinematics
• Numerous enigmas to solve
• The varied and bewitching music and ambient sounds
• Voices and texts are available in 5 languages (English,French,German,Italian,Spanish)

DON'T FORGET TO CHECK OUT OUR OTHER FANTASTIC ADVENTURE GAMES!

On Mac, iPad, iPhone:
Amerzone The Explorer's Legacy
Atlantis 2: Beyond Atlantis
Atlantis 3: The New World
Atlantis 4: Evolution
Atlantis 5: The Secrets of Atlantis - The Sacred Legacy
Aztec The Curse in the Heart of the City of Gold
Dracula 1: Resurrection
Dracula 2: The Last Sanctuary
Dracula 3: The Path of the Dragon
Dracula 4: The Shadow Of The Dragon
Egypt 2: The Heliopolis Prophecy
Egypt 3: The Prophecy
Jules Verne's Journey to the center of the moon
Jules Verne's Mystery of the Nautilus
Jules Verne's Return to Mysterious Island
Jules Verne's Return to Mysterious Island 2
Louvre The Messenger
Necronomicon: The Dawning of Darkness
Nostradamus The Last Prophecy
Road to India Between Hell and Nirvana
Versailles 2