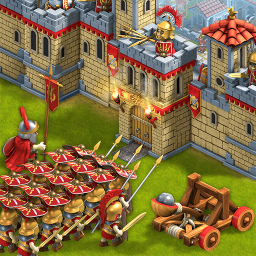 Rise of the Roman Empire

Rise of the Roman Empire, the strategy war game of Roman Empire. Go back to the age of Empires and build a dynasty that will stand the test of time! Strategically upgrade your warriors, and protect your city, travel back to the age of Empires. Join the battle to rewrite history of Rome and Europe! The glory of Rome awaits you in this war strategy game. Play Rise of the Roman Empire and turn your small town into the largest and most powerful empire in history.

Caesar! You have to take control of a Roman settlement and turn it into a powerful, prosperous Roman Empire! With a General like you, Rome will regain its former glory!

The Roman warriors are strong and brave, they fight like wolves, but they lack an experienced leader. A strong, tactical and strategic general.

The Emperor, in addition to the Roman legions and the fleet, under your command there will be 2 strong advisers - Ovid and Asteria!

Ovid is an experienced commander, a tactician and strategist, seasoned in battles with barbarians. A participant in the great imperial wars with the kingdom of Elvinar, the mighty empire of Sim and the cruel island of the Viking clan. Has awards of the Orders of Ice and Fire, as the highest title of devotion to the Roman Empire! Ovid is the chief admiral of the Roman Empire, legends are made about him. The conquest of new lands has already begun!

Asteria - has a sharp and flexible mind, knows how to correctly plan, manage the construction and life of a Roman settlement. Knows how to build various buildings of production, architecture and culture of Rome. How to build and manage trade routes. Knows how to negotiate with neighboring tribes, villages and cities. Will help in the diplomatic conduct of affairs, a peaceful outcome in the war. Asteria is a real forge of the great Roman Empire!

With an Emperor like you and such powerful advisors, the new age of the dawn of the Roman Empire will begin! The whole civilization is in your hands! The strategy for the development of Roman culture depends only on you!
Great wars and conquests, building a city, seizing new territories, training soldiers, equipment, production of resources and goods, sea battles and trade, raids and dungeons, hundreds of interesting quests and tasks, battles on the global map with other players - All this is available to you! City building game! Emperor! The Roman Empire is you!

Thanks for this beautiful game

Tried several games with a similar theme this one the best by a long mile. Noticed the Vikings saga is popular will probably try later as well