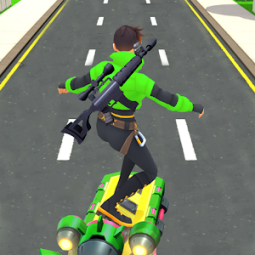 A brand new non stop action filled experience! Compete in high-speed epic battle runs across the royale Island to save it from the influx of menacing robots! Smash crates, avoid obstacles and defeat the oncoming enemies…Can you defeat the bot bosses? – all with thousands of possible character combinations!

- Run, slide and jump with your favorite battle royale characters.
- Play across iconic locations and explore the suburbs , the forest, the epic evil robot fort and so many more!
- Surf into Portals that will transport you to a secret location to complete in missions and find secret items
- Battle the best bosses across the island and unlock cool rewards.
- Build up your running skills and scout the Island to defeat all Robot minions in epic battles.
- Beat them with style: customize for extra XP points!
- Drop into the gameplay with your glider
- Get a better view of the landscape while riding the flying PInata! Pinata Party Time!

Upgrade your weapons and hoverboards and make quick work of your task!
- Crash into different crates to collect your upgrades
- Go on battle runs and unlock rewards to build up, upgrade and customize your runner.
- Go on the run and unlock challenges, characters and rewards to give your game a boost.
- Classic endless runner gameplay with a shooter spin.

Shoot your gun to take out the cool robot enemies from afar. Enter the portal missions to take out as many bad guys as you can to earn stars. Watch out for the boss robot. You can also perform new special attacks against robots by running at them like flying kicking the robot minions. Collect ammo boxes to get more bullets to fire. Blast through the walls of the robot base using your gun, there are 15 amazing guns to collect, including the tommy gun and the missile. As well as fun and wacky shooters like the pizza tosser.

Wall run to pass over and around enemies to collect coins and tokens. You can use tokens to upgrade your character or to unlock new special characters.

Avoid vehicles like cars, buses and taxis as you rush through the streets, hop on to your hoverboard to enter super fast action. Dodge the crazy drivers in this dynamic 3D world. With miles of roads and turns you can dash through the city for hours. Each environment has unique gameplay features to increase the fun, avoid barrels and run through the cabins in the forest, fight robots and avoid electricity in the robot fort and watch out for traffic in the city.

Characters are unlocked for free by levelling up, you do not need to buy characters. There are 100 levels for you to unlock, battle the robots, compete in portal challenges and open supply crates to get experience. With easy and hard daily missions there is an unlimited amount of objectives to provide non-stop action.