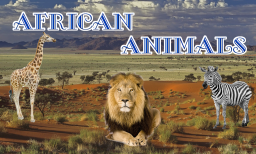 Our application will introduce you to the animals living on the African savannah, you will hear the sounds of wildlife. Each animal produces multiple sounds, which makes it possible to learn how to better communicate with animals.
Also, you can enjoy high-quality images of animals in their natural habitat.
The application include three mini-games.

Whereas the earliest traces of life in fossil record of Africa date back to the earliest times, the formation of African fauna as we know it today, began with the splitting up of the Gondwana supercontinent in the mid-Mesozoic era.

The continents Laurasia-Gondwana 200 million years ago
After that, four to six faunal assemblages, the so-called African Faunal Strata (AFSs) can be distinguished. The isolation of Africa was broken intermittently by discontinuous "filter routes" that linked it to some other Gondwanan continents (Madagascar, South America, and perhaps India), but mainly to Laurasia. Interchanges with Gondwana were rare and mainly "out-of-Africa" dispersals, whereas interchanges with Laurasia were numerous and bidirectional, although mainly from Laurasia to Africa. Despite these connections, isolation resulted in remarkable absences, poor diversity, and emergence of endemic taxa in Africa. Madagascar separated from continental Africa during the break-up of Gondwanaland early in the Cretaceous, but was probably connected to the mainland again in the Eocene.

The first Neogene faunal interchange took place in the Middle Miocene (the introduction of Myocricetodontinae, Democricetodontinae, and Dendromurinae). A major terrestrial faunal exchange between North Africa and Europe began at about 6.1 Ma, some 0.4 Myr before the beginning of the Messinian salinity crisis(for example introduction of Murinae, immigrants from southern Asia)

During the early Tertiary, Africa was covered by a vast evergreen forest inhabited by an endemic forest fauna with many types common to southern Asia. In the Pliocene the climate became dry and most of the forest was destroyed, the forest animals taking refuge in the remaining forest islands. At the same time a broad land-bridge connected Africa with Asia and there was a great invasion of animals of the steppe fauna into Africa. At the beginning of the Pleistocene a moist period set in and much of the forest was renewed while the grassland fauna was divided and isolated, as the forest fauna had previously been. The present forest fauna is therefore of double origin, partly descended of the endemic fauna and partly from steppe forms that adapted themselves to forest life, while the present savanna fauna is similarly explained. The isolation in past times has resulted in the presence of closely related subspecies in widely separated regions Africa, where humans originated, shows much less evidence of loss in the Pleistocene megafaunal extinction, perhaps because co-evolution of large animals alongside early humans provided enough time for them to develop effective defenses. Its situation in the tropics spared it also from Pleistocene glaciations and the climate has not changed much