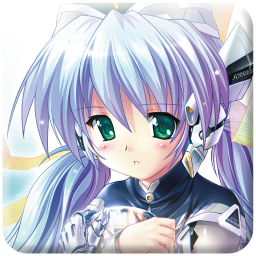 SF's first full-scale work "Key"! I enjoy the full voice and touching story spun by "Yumemi" of over broken robot!
"Heaven in two, please do not split"
"planetarian - Dream of Little Star -" the first full-scale work SF brand "Key" eminent, "Yuichi Suzumoto" scenario, the mechanical design is original and appointed "Kotsue-ji" popular illustrator. Beautiful graphics and music, and a variety of special effects, which brings to life the story full sensation. Android version will deliver (hero) Daisuke Ono, complete with full voice by talented actors who, beginning with (heroine) Keiko Suzuki!
Synopsis
Stage in the near future.
Due to the collapse of the universe and the development of global scale excess population, World War I broke out 30 years ago. Depleted population, the Earth's surface which is covered with thick clouds, the rain never stop had lasted.
A man came, the city autonomous dangerous fighting machine in the world that such domination. Then, in the building that had invaded to hide himself, I found that some facilities.
Planetarium - Once upon a time, space and people have different views of the heart heal stadium of stars. A girl greeted him there.
"Yumemi" is the name of the girl. Planetariums 30 years, who had no visitors, was employee robot commentary been waiting customers.
He remains to be beg to "Yumemi" , in order to fix the projector , which has become stuck , continue to repair and forget the time . Furitsuzuku Among the rain , day-to-day him and go quietly flow " Yumemi" ... .
Every day, such as distant rock nostalgia his mind. Artificial starry sky, think what is he?
The fate of the "Yumemi" and is -?
Characters
Voice Kuzuya ... Daisuke Ono
Hero. We live to discover those valuables from the city was abandoned in the war. I met with the "Yumemi" in the building fled pursued by autonomous fighting machine.
Keiko Suzuki Voice ... Yumemi Hoshino
Mass companion robot that has been produced before the war large.
Appearance has been made to imitate the 15-16 year-old girl, seemingly indistinguishable from humans.
Hall was assigned to the department of the head office rooftop planetarium Hanabishi is a long-established department store, was doing the work and commentary of planetarium projection hospitality mixed with human colleagues.
Immediately after the outbreak of the war when 30 years ago, was abandoned in response to bacterial attack city with a workplace, as it is left in the planetarium.
Also be initialized the settings at that time, because there was not also cut off power, she said, "the guests do not come because the epidemic has changed, not there the staff because you went on a trip" comfort and while it is still convinced I had been waiting calmly customers that never come.
Tested Devices Do not use this device outside. /Model and was released from the company's mobile phone carriers in Japan /OS2.2 or more /Learn more http://sp.v-motto.jp/amazon/appli/planetarian/model.php
Production and copyright
(C) VisualArt's / Key