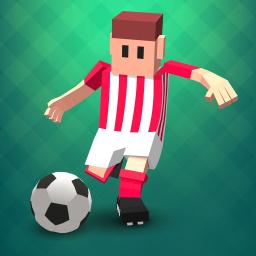 Become the world's ultimate Striker in Tiny Striker: World Football! From the makers of the smash hit Tiny Sports series.

Join your Tiny Striker as they go pro, rising from the lowest leagues. Can you make it on the world stage?

It is your job to train and craft your Striker to compete against football clubs, across many countries and divisions, to become the ultimate champion.

FEATURES:
+ Flick up to curl your shot around defenders
+ Flick down to lob your shot to reach teammates
+ Select your starting team
+ Battle through many football leagues
+ Play in live Event Matches - world tournaments and cup matches
+ Transfer to other countries, teams and leagues
+ Play against the world's best teams in the UK, Spain, France, Portugal, Italy and the Netherlands
+ Train to boost your striker's power and curl skills
+ Attract sponsors and improve your skills and match earnings
+ Work with your agent to advance your career
+ View, capture and share your match highlights

#1 Soccer Game in Over 98 Countries: Including UK, USA, France, Portugal, Italy Spain, Australia and Canada - Thank You So Much!

The Tiny Sports series has had over 6 MILLION downloads. The original Tiny Striker game was a top 10 sports game in 135 countries and it even reached the dizzy heights of #1 free game in over 34 countries.

Need help or just want to tell us how to make the game even better? Leave us a review or get in touch and let us know.

Privacy Policy:
By downloading the Tiny Striker: World Football app you are indicating acceptance of Fat Fish Games Ltd's Terms and Conditions and Privacy Policy www.fatfishgames.com/privacy.php. If you would like Fat Fish Games Ltd to remove any data we have relating to you and your use of the Tiny Striker: World Football App, please email hello@fatfishgames.com