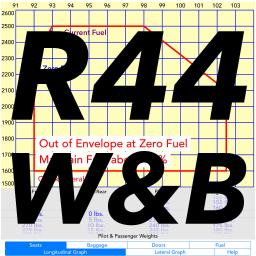 R44 Weight & Balance graphs the center of gravity and weight with current fuel and at zero fuel. Want to know whether or not your heavy passenger *really* has to sit in the back and how much fuel must be maintained to stay in CG? This app will tell you at a much lower cost.

This app will be a great help to new R44 pilots that need to quickly figure out if they have to put their 250lb. friend in back and the 160lb. teenager in front to maintain CG as well as how much fuel must be maintained to stay in CG in cases where it’s out of CG at zero fuel. It’s also a great educational tool for new pilots to quickly see how much influence a seemingly insignificant amount of weight has on CG. You’ll quickly find out why R44 pilots are most desirable in the 150 - 200lb. range. You’ll also discover why the R44 CG envelopes are beveled at the corners.

The primary data displays are Longitudinal and Lateral graphs. You can look at the raw numbers if you want to, but it’s designed to give you CG data in graphical form. You’ll find yourself hardly ever looking at the raw number display.

This app came about when I saw what was being charged for the other R44 weight & balance apps. I just couldn’t see paying significant money for a calculator I could write in five minutes. It turns out that while yes, I could whip something up in a short amount of time for a single heli on a single iDevice, creating a dynamically graphed app that holds multiple R44 and scales from an iPhone 4s to an iPad Pro with no loss of functionality took considerably more than five minutes. More like a hundred hours or so. On the bright side, I think the end result offers more than competing apps at a much lower price.

It is intended to be run on iPhone 5 and larger up through an iPad Pro. On an iPhone 4s, the graph will be compressed (good excuse to trade up).

Features:
• Shows CG for both zero fuel and current fuel.
• If out of CG at zero fuel, it shows the minimum fuel that must be maintained to stay in balance.
• Longitudinal and Lateral CG graphs.
• Holds multiple R44 helicopters for those who fly more than one and can easily switch between them.
• Accommodates the Astro, Mariner, Raven I, and Raven II, and the yet to be released Cadet (best guess / experimental)
• Individual weight entries for all seats and baggage compartments
• Accommodates doors on & off; makes more difference than you would think.
• Shows overweight warnings for the overall helicopter and combined seat & baggage.
• Runs on iPhone 4s through iPad Pro.
• Light weight app: uses little space and low CPU usage.