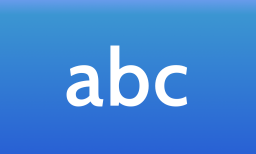 Similar to flash cards, this app is designed to help adults teach children words, numbers, and simple math. This app provides list of words and numbers for you to cycle through with your children. The app has a very simple and clean design, just a few colors, it goes straight to the learning concepts, not to distract your children from the actual learning. It makes it very easy and fun to use on the sofa, in line while grocery shopping, in the car... anywhere really.

Similar to flash cards, or word lists, you can randomly cycle through words, numbers or simple math with children and have them read them aloud while you supervise and help them learn.