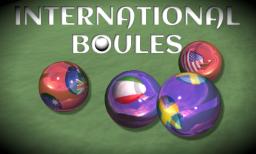 Now free for a limited time only! Download your copy today!

Join the world of Boules and play a game of Boule, Bocce, Boccia or Pétanque against the computer or your friends!

With International Boules your Apple TV is transformed into a Boule, Bocce, Boccia or Pétanque game.

You use the Apple TV remote control by aiming carefully and then swinging it towards the screen to throw balls towards a little white ball, called the Jack. The winner of a round is the team that gets the ball closest to the Jack.

The game is so easy to learn that a five year old can play it with no problems, and still challenging enough that everyone will enjoy it.

View the game from many different camera angles to get a better overview and get a foundation to the best tactics to beat your opponent.

From a selection of 50 different countries, pick the two countries that should battle it out in really exciting games where the tables can get turned with the very last throw!