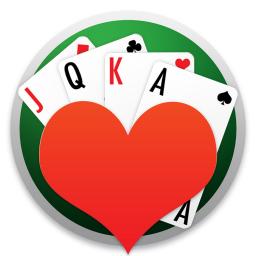 This is the classic trick-taking game, clean and simple. In this card game, try to avoid the Hearts and the Queen of Spades, or take all of them to Shoot the Moon. How low can you score? On the Hard level of difficulty, Marie, Nikola and Albert are really, really smart! Don't worry, though, you can change their names and the difficulty.

HOW TO PLAY
1. Each hand begins with choosing 3 cards to pass to another player (every 4th hand there is no passing).
2. Each hand, the player with the 2 of Clubs must use it to lead the first trick.
3. The other players must play a card of the suit that was led if possible.
4. The player who played the highest card (Aces are high) of the suit led takes that trick and leads the next.
5. Hearts cannot be led unless (A) a Heart was already played (Hearts Broken), OR (B) there is no alternative.
6. When no cards remain, players are awarded points according to the cards in the tricks taken.
7. Each Heart is worth 1 point and the Queen of Spades is worth 13 points.
8. A player who takes all 26 points (Shot the Moon) scores 0 points while the other 3 players get 26 points each.
9. After the points have been added, a new hand begins. This continues until a player has reached 100 points.
10. The player with the lowest score at the end of the game is the winner.

WARNING
This game can be very addictive. If you play for long periods of time, move your body position on a regular basis to reduce the risk of injury. Enjoy responsibly!