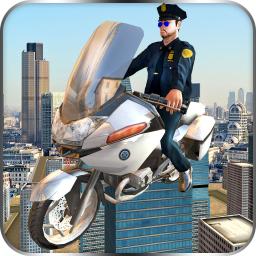 Flying Police Bike rider get ready for a stunt twist with flying bike in the newest futuristic flying car simulator and stunt bike racing games. This flying bike games racing theme is to be a traffic policeman as you are retired airplane pilot! while flying the racing stunt bike through the Highway traffic in City of America. Time travel to the future, fly the extreme trial stunt bike on the America city rather than being a Bike racer
Burn the asphalt at unstoppable speed while driving as a best driver in the future city. Speed up by switching on the turbo engines, enjoy piloting and motorbike driving in the future city. Avoid crashing into the skyscapers of the American city. Perform motorbike stunts in the sky like never before in the latest flying game - NAMED "FLYING POLICE BIKE RIDER Simulator 2016".

Try on the role of the flying bike Stop the drivers and violators of traffic rules, don't let them escape discharge fines go to exciting chases, but do not forget to do other routine chores and rescue civilians that every day is engaged in the traffic cop. Chase, Catch & Smash Real Gangsters in Extreme flying police bike rider 2016. Play Brave cop thrilling adventure bike chase for a greater cause to eliminate crime threat from city and bring peace in this Grand traffic flying police bike game. Rush through the city traffic while chasing the crooks and smashing criminal bikes and become a traffic police crime city police driver. The police chase adventure takes a new twist. The thrill is incomplete without cops vs robber’s thrilling story in the city of peace. Hero cop! Chase wanted thugs to eliminate crimes. On duty officer is not feeling well. Police car is out of order. Get on the flying police bike and chase down the criminals escaping from even the narrowest ways. Driving fast can make you catch the criminals and send them to jail for the crimes they have committed. Give them a hard time for their grave sins. Do not bang into the innocents and thrash into untouched cars. Bike chase and car smashing is going to be a lot of fun. Test your driving skills in this exciting simulation game as a brave cop to protect your city from crime.

Extreme Flying Bike driving simulator, our running game will offer you an experience like no other! Within a time limit , you must destroy the thief before he escapes . You will thus into him as hard as possible and try to block it in turns. But attention to traffic and pedestrians ! You're a cop and you will not have to hurt civilians or damage to other vehicles.
Get ready for an awesome bike ride on twists, turns, steep climb, roads and offroad bike simulator. This fun-filled exciting flying motorbike game is an ultimate police chase between cops and robbers for an ultimate stunt driving bike rider. The jail breakout prisoners, cell inmates and the gang members are going to face a hard time to run away with the stolen heavy bikes. Arrest them and send them to prison. While the other search teams, police helicopter, Rottweiler sniff dogs and police officers are busy chasing down more gangs in a suburban area; you will have to take care of this robbery. Enjoy the most wildest escaping missions in a cop chase simulator game. Ride fastest and don’t let them get away.