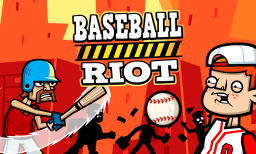 Baseball Riot is a free physics based puzzle game loaded with comedy and mayhem! Take control of retired star batter Gabe Carpaccio as he goes on a crusade to free his former team from the grasp of Explodz Inc. Smash baseballs at various Explodz fueled goons, bounce the ball of walls and platforms to knock out many targets at once and even detonate Explodz craters to launch the baddies sky high! See the enemies tumble as hapless ragdolls and try to master each level by collecting three stars.

Baseball Riot is Try & Buy: Play the first region for free and then decide if you'd like to unlock the rest of the game with an in app purchase.