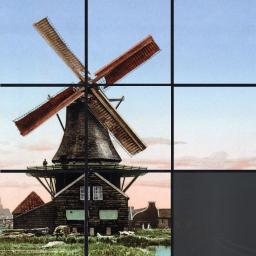 -Lot of choices, so you can choose your favorite image.
-Several difficulties 3x3 - 4x4 - 5x5 ...
-Easy to preview the image
-Totally FREE

A sliding puzzle, sliding block puzzle, or sliding tile puzzle is a tour puzzle that challenges a player to slide (frequently flat) pieces along certain routes (usually on a board) to establish a certain end-configuration. The pieces to be moved may consist of simple shapes, or they may be imprinted with colors, patterns, sections of a larger picture (like a jigsaw puzzle), numbers, or letters.

Unlike other tour puzzles, a sliding block puzzle prohibits lifting any piece off the board. This property separates sliding puzzles from rearrangement puzzles. Hence, finding moves and the paths opened up by each move within the two-dimensional confines of the board are important parts of solving sliding block puzzles.

From the 1950s through the 1980s sliding puzzles employing letters to form words were very popular. These sorts of puzzles have several possible solutions, as may be seen from examples such as Ro-Let (a letter-based fifteen puzzle), Scribe-o (4x8), and Lingo.

The fifteen puzzle has been computerized (as puzzle video games) and examples are available to play for free on-line from many Web pages and mobile phones. It is a descendant of the jigsaw puzzle in that its point is to form a picture on-screen. The last square of the puzzle is then displayed automatically once the other pieces have been lined up.