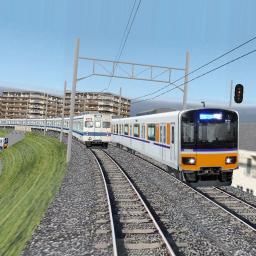 I spent more than two years to create this game which enables players to drive a train following signals and based on precise physics culculation while other trains run simultaneously according to timetables.
There are 37 sets of Tobu trains and 7 of others running on lines of some 50 kilomters.

You are to drive precisely and safe.
The ATS game--
replicates actual operations of switch rails, signals and crossing gates.
reproduces passing loop on a single line, train overtaking, and stop signals before arriving at terminals.
uses transition curves on railroads to offer very gradual curve.
gives you general idea of how signals and safety equipment work.
lets players know why it takes extra time during rush hour.

Licensed by TOBU RAILWAY CO.,LTD.
This is a work of fiction. Train lines and stations are used fictiously. Any resemblance to actual locales is entirely coincidental.