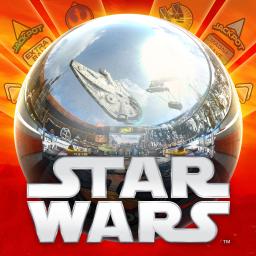 Choose to support the Galactic Empire or the Rebel Alliance with your high scores as the Star Wars Pinball community fights for the Balance of the Force!

May the Force be with you!

**For players already enjoying Star Wars™ Pinball tables in Zen Pinball, we want to give you a heads up that there is no way for us to transfer purchases or make tables available in both apps. Thanks for your support!**

What the Press Are Saying:

Penny Arcade Report (Ben Kuchera)
If you’re a fan of pinball, Star Wars, or fun things, this is pretty much a must-purchase.

GamesRadar
As a complete package, Star Wars Pinball delivers the kind of arcade experience that makes you crave just one more game, constantly chasing to surpass your own score for the sheer satisfaction of it.

Desctructoid - 9.5/10
Each table is chock full of beautiful art, character cameos, and tracks pulled straight from the films' soundtracks. These first three tables are a bold and equally stellar introduction to Star Wars Pinball, and they'll keep you more than busy until Zen Studios drops the next batch.

Game Informer - 8.5/10
You don't need to be a Star Wars fan to recognize the creativity Zen has brought to the new tables. The company continues to include more fantasy elements in its designs.

AppAdvice
“Star Wars fans will certainly enjoy the visual treat this game offers. That, combined with the fun gameplay make this a must have. It is impressive. Most impressive.
Jump into hyperspace to check it out in the App Store.”

MacLife
For fans of the franchise or virtual pinball in general, it's a real treat!

First of all the game physics are lacking. The bounces don’t seem realistic and the ball will randomly stick to surfaces and not do what you’d expect. When initially buying the game you only get the one table. Anything else is another $2! Over-priced sub-par game grubbing for money using the Star Wa…

I am a kid and everything costs to much I don’t want to by everything because I don’t really have money I’m just a kid.

Issue with the Boba Fett table

Don’t know if there’s even anyone still working on this game but if there is, there’s an issue where there’s a check mark constantly on the boba fett table that blocks the table and ball underneath it.

Love these pinball ball games! Absolutely awsome. With being said what moron decided that a big blue check in the middle of the screen was good idea? I mean really amateur graphic flaw. And on the Boba fett one its eternally on the screen the of a penny!!??!! Im like wow guys?! Why not just a small …