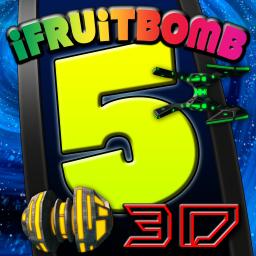 iFruitBomb 5 - The Fruit Machine Simulator returns with a host of new features, armed with its largest game board to date. This all new fruit machine supports single or multiplayer gaming on the same device, or online via Game Center. Play in full screen high resolution graphics on iPad and iPhone/iPod Touch with retina display. Also supports non retina display models.

Single player Tournament Mode: Play against computer controlled opponents in a timed race to cash out with the most winnings.

Multi-player Credit Play and Tournament Modes: Supports play for up to 4 people on the same device.

All new ultra sized reels and a 3D reel stacked cash climber with more fruits than ever before.

Includes the all new Bomb Roulette and Astro Bingo board features.

Zoom mode graphics engine takes you straight to the action, featuring a return of the 3D device tilt reel views.

FREE TO PLAY after the initial purchase.

A stack of hidden features typically found in UK fruit machines such as the hidden holds on re-spin, no-hold holds after nudges etc.

8 leader boards for different gameplay modes, and a host of trophies to unlock.