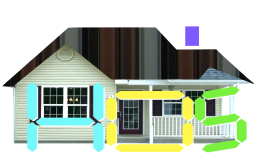 HOS Smart Home All In One

Providing Live values for all Smart devices showing the actual 3D animated image of the device with Live Values represent the actual percentage (or other units) of the device during operation (Live Edition).

Dynamic 3D Animation reacts exactly as it do in real world, like a Fan that turns faster as the actual rotation speeding up or a light that changing color status as the real bulb changing it's hue (Live Edition).

Hi Quality Sound Effects reflects the real sound of each smart device as it operates in real world, Like opening and closing a sprinkler or faucet, turning on/off a light switch, rotating a thermostat knob, running a ceiling or a desk fan and many also for HVAC units (Live Edition).

One touch Scene recorder allow you to store 4 presets of all devices together Even from different protocols (for Apple HomeKit, BACnet, KNX) on each zone so it’s like 24 scenes for each room.

Designed to control multiple houses and properties at the same time so if you have a summer house and a winter hut you may control and monitor both from same app on your touch device iPhone/iPad, Apple Watch or AppleTV.

Including Global System Events Actions And Control Into Each Smart Button You Create like DoorBell, Come/Arrive, Wakeup/Sleep, etc. (digitalSTROM).

WYSIWYG (What You See Is What You Got) technology allow you to use your iPhone/iPad camera to add real rooms / devices photos / skins to be controlled by a simple touch. VR (Virtual Reality) simulate the exact actions of the real push button wall / in-line switches in your room with a set-up easier than setting a channel on your conventional TV.

Multi Layers Option Allowing you to Add A transparent layer of alpha pictures on each others to build your own unique custom room design making home control real & more user friendly.

One on one voice assisted live tutorial makes it easy for the average user to get the basics of building a smart home control using HOS.

Backup and Restore your Smart Houses profiles on your iCloud as well as your personal computer (no other system do) never been as easy.

The software is an apple iOS or TVOS application that is configured and controlled from anywhere in the world with any web-enabled iOS or TVOS device.

This is an all devices App (iPhone/iPad, Apple Watch, and AppleTV) which means you can pay for one device and download the app for all other devices for free.