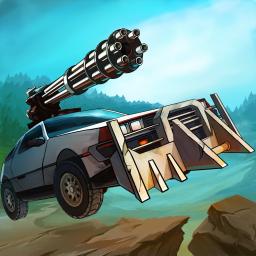 Tired of the same old shooters and hundreds of tedious titles? Don't miss the long-awaited sequel of the popular epic arcade Zombie Derby™ and you will never be bored again! Discover the dangerous post-apocalyptic world crawling with zombies. Race dream cars and dodge deadly perils lurking around every bend.

Once again, millions of bloodthirsty zombies are swarming all over the continent. That’s why only the bravest and most experienced drivers will still be standing after fighting countless armies of the undead in this tough apocalyptic reality. Become one of the heroes in the new world and flip the script! It's time to upgrade to brutal supercars and clear the roads that are chock-a-block with zombies. By the way, it goes without saying that tuning your car up and making it into a wicked road monster will be a piece of cake for a born zombie slayer like you!

Game Features
- Have a blast slaying millions of blood-thirsty zombies of different kinds
- Upgrade cool cars: 8 vehicles to choose from including the Zombie Combine Harvester
- Drive through vast expanses of this hostile world
- Compete with friends all over the world trying out different game modes
- Take part in a bloody massacre in real 3D