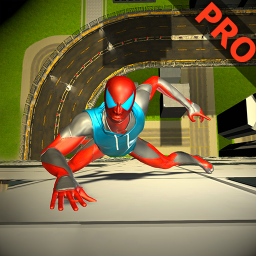 This time city really needs your your help. Police has found an information about secret laboratory where villains intend to create his own army of mutants. And this army will stop at nothing to get what they want. The only champion who can stop this army is you. So, start a new contest in the game Spider Adventure!
Prevent a new invasion!
Your enemy is planning to summon its army of mutants and aliens. This exponential evil is going to destroy everything on it’s way. Fight to save your city!Look for evidence of a crime and become a new guardian of this Universe in this open-world adventure. Non-stop action, unlimited challenges, great contest for superheroes.
Participate in the secret investigation and become flash speed flying hero.
Join the investigation and find out what a big corporation is hiding. There might be some strange and even dangerous things. So, defy the power of corporation and perform all your duties of superhero.
Most of the missions will be on streets, some will be in Chinatown district and other gang lands etc. You were on a Incredible superhero secret mission, stealing the important information about the enemies, the army base camps, rebels and the underworld Mafia. You will fight various star mafia gangsters from America, Russia, China, Mexico, Japan etc. The game contains fully Open world Environment. Explore the big city, go off-roading in the mountains, steal and drive super cars, shoot guns and more in this free open world game! Explore the crime city, full of gangs and aggressive fractions. Become citizen hope as a standard of pure law and justice, or come to the city as a new doom knight.You can also buy a lot of things in a shop to help you complete missions and release the city from all mafia sinners.
This game has good old story about a anti car thief in a dangerous town. Dominate the city with a devastating firepower of advanced military vehicles or upgrade your hero to knock down enemies in a few kicks! Let it be as a beautiful city, do not turn into crime city with blood and robbery.
You have special real powers. You can shoot spider web from your hands. You can shoot a rope to a building and climb over the building to the top. Your legs also very powerful. Don't mess with the police, they are the good ones.