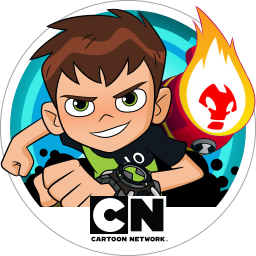 Use Ben 10's alien powers to run, jump and smash your way past enemies, obstacles and supervillains in Ben 10: Up to Speed!
MEET BEN TENNYSON
Ben was on a road trip with his Grandpa Max and cousin Gwen when he discovered the alien watch known as the Omnitrix. Now, he can use it to turn into alien superheroes, each with amazing abilities.
UNLEASH ALIEN POWERS
Turn into the super-strong Four Arms, the fiery Heatblast, the lightning-quick XLR8 and more incredible aliens. Use their individual powers to blast the bad guys, smash through obstacles and even access alternate paths.
POWER UP THE OMNITRIX
Level up your aliens and the Omnitrix itself to become faster, stronger and more heroic. Change into the right alien in each situation to make the most of your powers.
Master the Omnitrix and its aliens to save the day in BEN 10: UP TO SPEED!
**************
This game is available in the following languages:
English
French
Italian
Russian
Turkish
Arabic
Bulgarian
Czech
Danish
German
Spanish
Hungarian
Dutch
Norwegian
Polish
Portuguese
Romanian
Swedish
Brazilian Portuguese
Latin American Spanish
Korean
Japanese
If you're having any problems, contact us at apps.emea@turner.com. Tell us about the issues you're running into as well as what device and OS version you're using. This app may contain ads for Cartoon Network and our partners’ products and services.
******
Before you download this game, please consider that this app contains:
"Analytics" for measuring the performance of the game and for understanding which areas of the game we need to improve;
Terms and Conditions: http://www.cartoonnetwork.co.uk/terms-of-use
Privacy Policy: http://www.cartoonnetwork.co.uk/privacy-policy