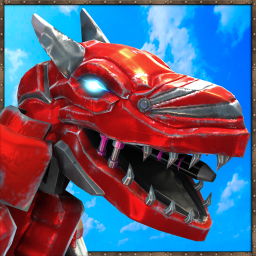 When dinosaurs meet science and technology, Scary Dino Robots are born!
Robots and dinos are a dangerous combo. With his giant body and powerful tail, he can easily destroy his enemies. Cute but menacing, he can do some damage! Wreck everything you can and cause havoc to earn maximum points. Thrash people and buildings with your almighty tail. Fight other androids, cops, and superheros whose sole mission is to deactivate you! Use those prehistoric legs to leap from building to building and smash cars, playgrounds, and bridges. Spit fire and ROAST your enemies. Climb atop skyscrapers and become king of the city! Dino Robot does not get tired! Super powers include Fire Ball attack, Rolling Tail, Jump Attack, Laser Cannon attack, and more.
Are you ready for the obstacles the city will put in your way?! Battle vehicles, the SWAT team, helicopters, and androids with awesome powers. Missiles will be launched your way. Stomp on the ground until everything shatters and you are standing victorious!