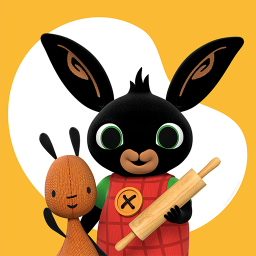 Get baking with Bing and Flop!
If your little one loves watching the award-winning CBeebies TV show BING, they’ll love helping Bing Bunny and Flop bake their favourite biscuits.
This interactive animated game lets your Bingster make and decorate biscuits in Bing’s kitchen and learn about the biscuit making and baking process too.
This fun, creative app will challenge your child by using screen actions that will develop both their creativity and imagination, as well as use their fine motor skills.
Let them enjoy making a mess without the mess!
Baking biscuits, it’s a Bing thing!
About Bing:
Produced by Acamar Films, with Dublin-based studio Brown Bag Films, Bing has seen extraordinary success since it launched on CBeebies in the UK in 2014. Adapted for television from the original books by Ted Dewan, Bing celebrates the joyful, messy reality of pre-school life and finds the big stories in the little moments. Bing is now broadcast all over the world and moves and delights Bingsters and their grown-ups through the series, games, apps, books, toys, live shows and experiences. www.bingbunny.com
This interactive game is developed by Acamar Films, creators of BING and Aardman Animations.
About Acamar Films:
Acamar Films is an independent production company based in London which produces, distributes, markets and licenses its international award-winning pre-school animated series Bing. Visit us at www.acamarfilms.com