This App Annie Apps Index brings you the hottest mobile apps outside of games across both the iOS App Store and Google Play for Japan in July 2013 based on market data from App Annie Intelligence. Japan is a special app marketplace in that the tops of the charts are dominated by apps from domestic publishers. Of the 32 unique apps covered in this Japan report, only six of them are published by foreign companies. To find out what's happening with apps worldwide, please check out the July 2013 App Annie Apps Index.

Continuing trends seen in the worldwide July 2013 App Annie Apps Index, social apps were well-represented in the Top 10 for revenue from Japan in July for both the iOS App Store and Google Play, while photo and video made a strong showing on iOS downloads.

Leading the iOS App Store in non-game downloads, Belarus-based Tap Nation’s Screen Lock Free was the only foreign app to rank #1 in any of the non-game rankings in Japan for July. The popular app added a security feature in which users could password protect folders on their home screens.

In Japan, the top downloaded non-game apps in the iOS App Store shifted in the rankings a lot from June to July. There was also a lot of diversity among these apps, as the photo & video category was the only category to place multiple apps in the Top 10.

Tap Nation’s Screen Lock Free was the only app by a publisher based outside of Japan to earn a #1 spot in any of the four rankings featured in this report for downloads and revenue within the iOS App Store and Google Play. Screen Lock Free enabled users to create locked folders that remain password protected even while the phone is in use.

LINE’s messaging and camera apps both earned spots in the Top 10 for non-game downloads in Japan’s iOS App Store for July. The publisher has since celebrated surpassing 230 million users in mid-August and announced select free character sticker giveaways.

CocoPPa, a mobile customization platform, moved up 21 spots to become the second-most downloaded non-game app in the iOS App Store in Japan during July. This app gave users the ability to create, share, and select custom app icons and wallpapers for their home screens. CocoPPa was very popular not only in Japan, but also in the United States. United, who published CocoPPa, announced that about 42% of CocoPPa’s cumulative downloads have come from the United States since its launch across both the iOS App Store and Google Play. United is currently set to launch its United States-based subsidiary CocoPPa, Inc. in September. 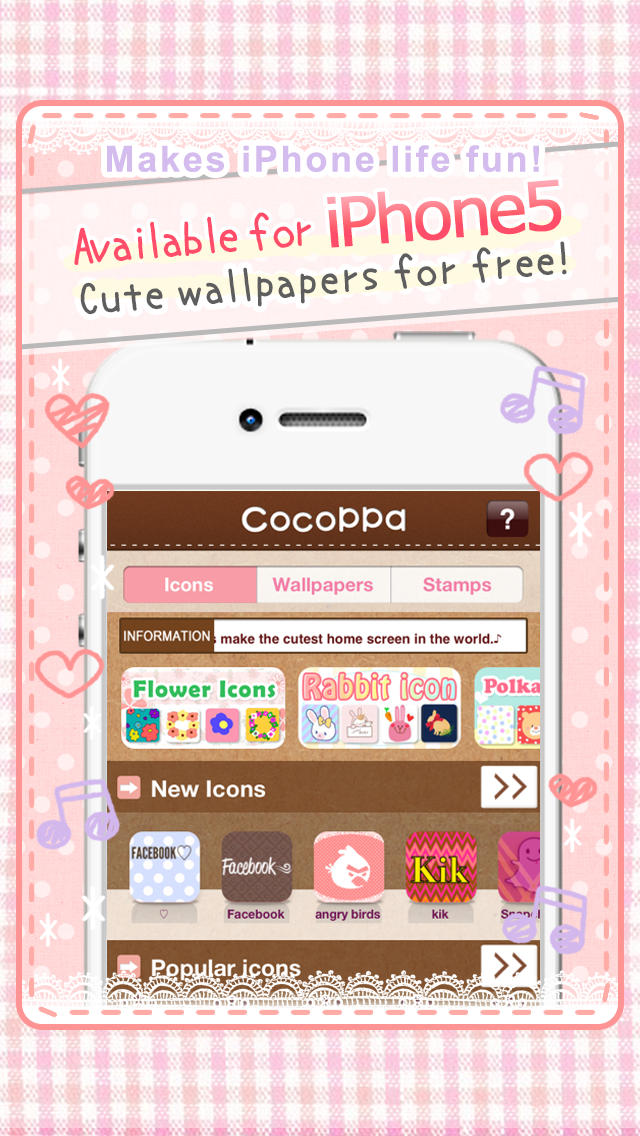 The automotive company Honda has published more than 20 iOS apps, including July’s #3 ranked RoadMovies - a movie app that finished the month as the top ranked Photo & Video app. With RoadMovies, users can make their own original 24 second video clips with 8 filters and 14 background music tracks. Released in November 2012, the app has been gradually gaining traction in the Japan iOS App Store download rankings since February 2013. In addition to Japan, this app was also popular in South Korea and Taiwan. 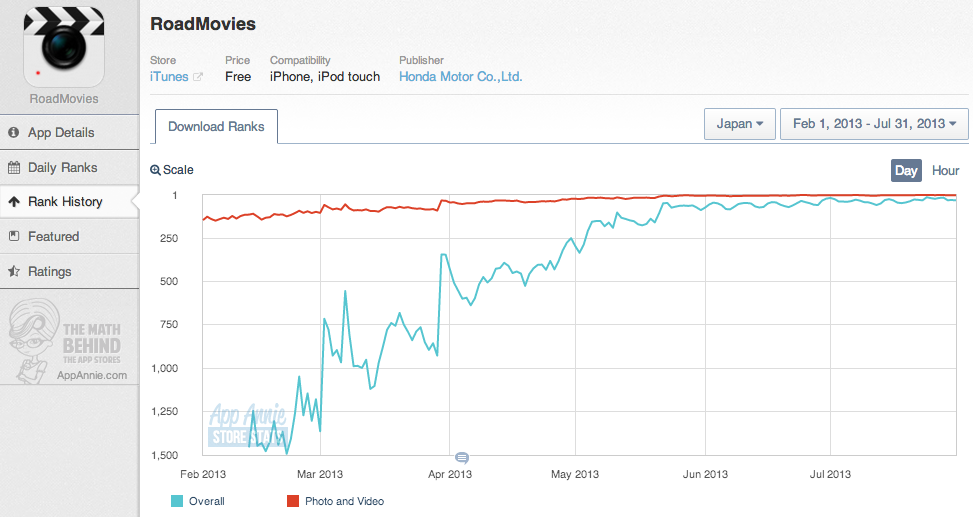 RoadMovies has gradually risen in the rankings since February.

Gunosy is a news aggregator app that analyzes users’ social media accounts, including Twitter, Facebook, and Hatena, for personalized news recommendations. The news category has been hot in Japan; in addition to other news aggregator apps, LINE and GREE both released their own news apps in July and August.

Local publishers earned 8 of Japan’s Top 10 ranked non-game apps by downloads in Google Play. Tools and social were the two categories that had multiple apps in the Top 10, with both apps from publishers based in the United States falling into the social category.

LINE was the only publisher with more than 1 app in the Top 10 as their LINE messaging app and LINE camera maintained their positions as the top two most downloaded non-game apps on Google Play in Japan. They were also the only two apps ranked in the Top 10 non-game downloads in both the iOS App Store and Google Play in Japan. The two apps worked well together, as users could use LINE camera to make customized stickers for the LINE messaging app. 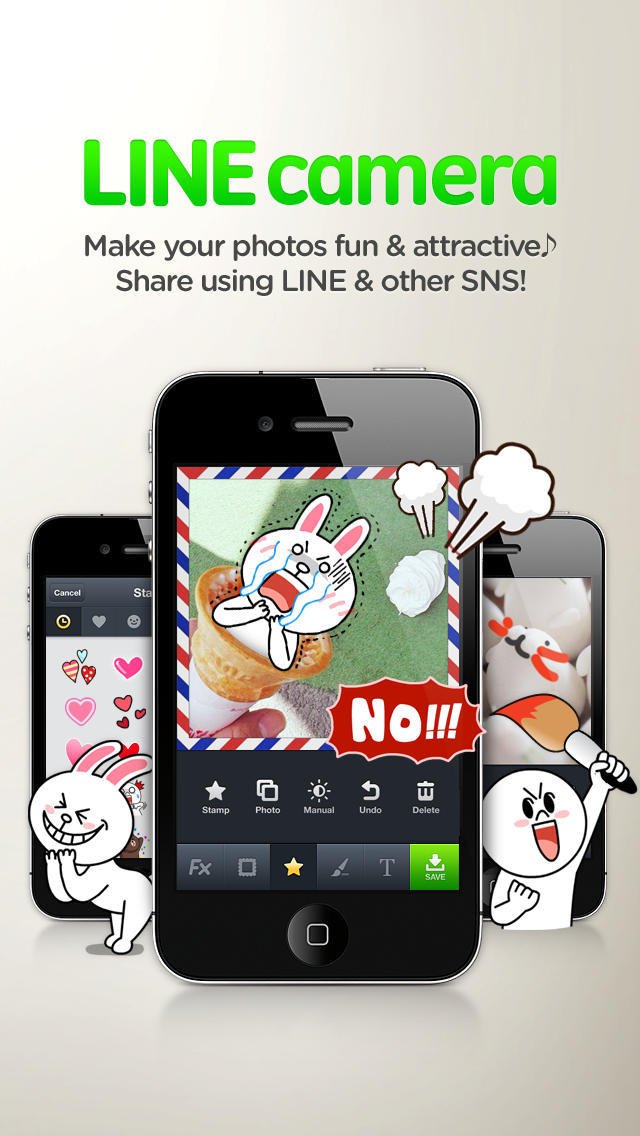 乗換案内 (Norikae Annai), a train route finder app, moved into the Top 10 for July as the most downloaded transportation app on Google Play in Japan. Transportation apps can be useful in Japan, especially in Tokyo, where trains and subways are the primary mode of transportation.

Publisher LINE had four of the Top 10 grossing non-game apps for the iOS App Store in Japan for July. Its popular messaging app, LINE, was the #1 app in both the iOS App Store and Google Play revenue rankings.

Books category apps were a unique driver of revenue in Japan compared to the worldwide non-game apps rankings. LINE マンガ (Manga) released its iPad version in mid-June and some manga titles were offering LINE stickers featuring their characters. On July 13th, another manga distribution platform, JUMP BOOK Store, published the digital version of Weekly Shonen JUMP, a popular comic magazine in Japan. Kinokuniya, one of the biggest bookstores in Japan, had its own e-book service, Kinoppy, ranked in the Top 10. Users could use the app to purchase both e-books and printed books.

Voltage’s In Your Arms Tonight, a visual romance novel app, moved up 30 spots to enter the Top 10. Voltage launched a television commercial campaign for the app on July 1st, which coincided with the release of an updated version of the app and an increase in the rankings. Voltage has previously released many visual novels for PC, feature phones, and smartphones. The publisher has also organized scenario and illustration contests for love-themed works. 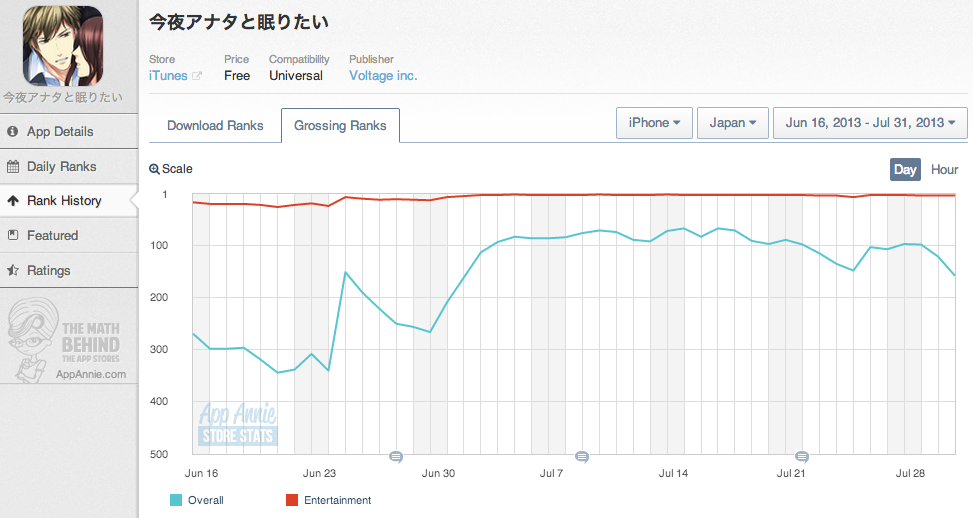 In Your Arms Tonight’s rank increase coincided with the launch of a television commercial campaign.

Cookpad, the most popular recipe website in Japan, maintained its #7 iOS App Store revenue ranking in July. Cookpad’s mobile app contains over 1.3 million recipes that users can search, save, and share with their friends. 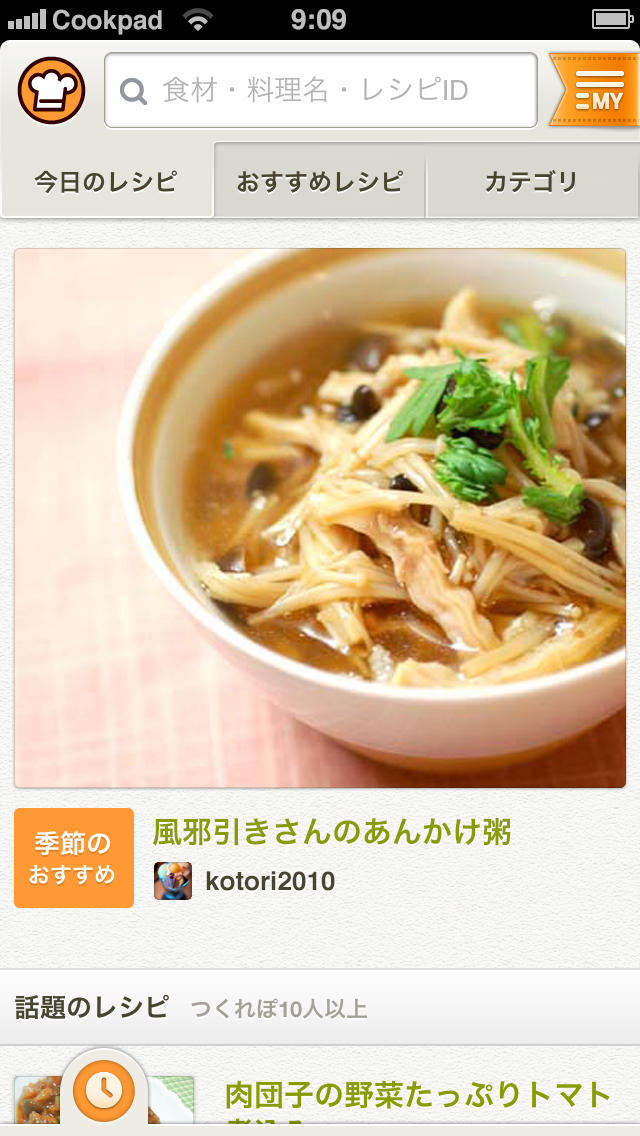 Cookpad’s revenue was driven by its premium service, which lets users bookmark up to 3,000 recipes and sort them by popularity.

Local Japanese publishers dominated the Google Play non-game Japanese revenue rankings for July. Only one foreign publisher, Say Hi, had an app make the Top 10. Impressively, the United Kingdom publisher’s crossover hit was a dating app, スマとも (SayHi!). Similar to the iOS App Store, the social and entertainment categories each had multiple titles in the Top 10, as did the publisher LINE. The top five non-game apps by revenue in Google Play in Japan remained consistent month over month.

In Your Arms Tonight climbed 24 spots from June to reach #6 in July. Similar to the iOS App Store revenue rankings, this was the highest rank change of the Top 10 ranking Google Play non-game apps in Japan.

As with the iOS App Store revenue rankings, publisher LINE held four of Top 10 Google Play non-game revenue spots in Japan for July. The LINE messaging app, LINE 占い (Fortune-Telling), and LINE マンガ (Manga) were all ranked in the Top 10 in both the iOS App Store and Google Play for non-game revenue. Third-ranked LINE 占い (Fortune-Telling) is an app where users can look up their horoscopes, get their tarot cards read, and connect with psychics for personal readings. There is even some fortune-telling content in which famous fortune-tellers are available as a paid service. LINE, GREE, LINE 占い (Fortune-Telling), and LINE マンガ (Manga) were each ranked in the top grossing Google Play non-game apps in the worldwide July Apps Index.

Again mirroring the iOS App Store rankings, two dating apps ranked in the Top 10 Google Play non-game revenue in Japan. ASOBO and スマとも (SayHi!) monetize with users paying for interacting with others via the app, including viewing others’ profiles, sending emails, chatting, and other available features.

Traditionally, hypercasual gaming is not a genre for premium income through the app stores. These titles are supposed to make all their money from advertising, right? Well, Lion Studios' Army Commander might just have changed the model.

Everything to Play For: Mobile Games Market Set to Generate 30% More Revenue in Q2 2022 Than in Pre-Pandemic Level

Mobile consumers are set to download more than 13.5 billion games and spend more than $21.4 billion in the quarter to maintain the sector's COVID-fuelled boom.