Welcome to the new App Annie Market Index, where at the end of each quarter, we’ll review the latest download and revenue trends by stores, countries and categories. In addition to our monthly Games and Apps Index, the Market Index provides you with a macro view of the trends, helping you identify the most fertile investment opportunities in the app stores.

Within the two app stores, several countries stood out for driving growth from Q4 2012 to Q1 2013:

Across all the countries mentioned above, Games remained the leading growth driver, even more so for revenue. By Q1 2013, the category had grown to cover approximately 70% of revenue in the iOS App Store and 80% in Google Play.

There were a few other top-ranking categories, however, whose gains pushed them higher in the category rankings: 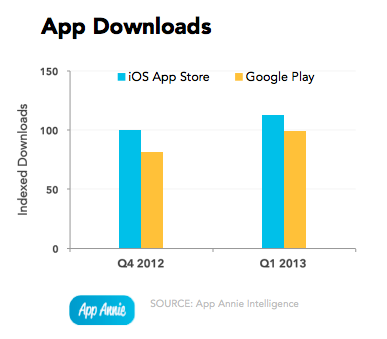 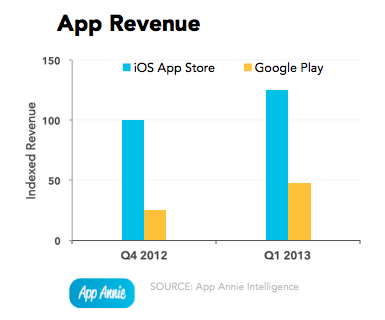 Last quarter, the United States maintained a substantial lead as the top-ranking country. In recent months, however, China has started to gain momentum in the iOS App Store and was the leading contributor to the increase in iOS downloads from Q4 2012 to Q1 2013. While Games were the top category for downloads growth in China, gains were seen in many other categories as well. Meanwhile, the United Kingdom and Japan have been alternating between the third and fourth ranks over the past year. All together, these four key countries have been driving roughly half of total iOS downloads.

The United States and Japan remained the leaders in the iOS App Store, responsible for close to half of total store revenue. While the United States drove much of the iOS revenue growth this past quarter, with Games leading the way, China’s move up the iOS revenue ranks above is not to be missed. Just last year, China was barely inside the Top 10. Over the past quarter, it has now moved to fourth, up from sixth in Q4 2012. Games is the category that has driven the bulk of China’s revenue growth; this category has grown to represent roughly 90% of China’s iOS revenue as of Q1 2013, the highest percentage seen across all countries in the iOS App Store. 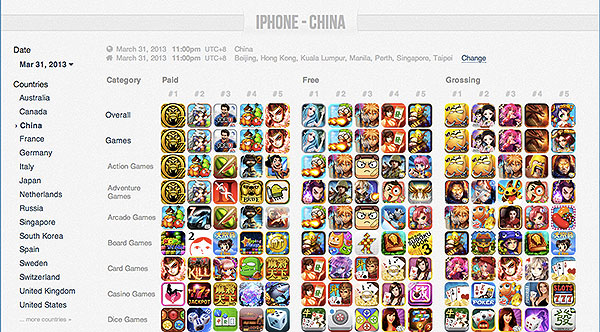 In China, it’s all about games, games and more games.
Check out the most popular games in China in our interactive chart.

In Google Play, the top four countries represented roughly 40% of store downloads in Q1 2013 as compared to about 50% for iOS. Russia has been rising steadily in downloads over the past year and moved up another slot to #4 this past quarter. Once again, the Games category was the key driver, as it grew to cover close to half of Google Play downloads in Russia in Q1 2013 (up from close to 40% in Q4 2012). This was nearly the highest percentage seen across the countries in the iOS App Store. South Korea and India maintained their second and third places behind the United States, representing how different the Google Play Store is compared to iOS in terms of global distribution.

Photo and Video apps surge to Top 3 in downloads

The Games category remained the clear leader and growth driver in the iOS App Store and was responsible for close to 40% of store downloads in Q1 2013. Meanwhile, the Photo and Video category moved up the download rankings and broke into the top 3 in Q1 2013. 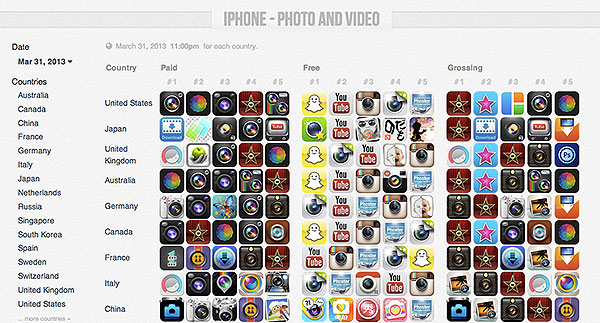 The Games category continued its explosive growth in revenue, covering about 70% of iOS App Store revenue in Q1 2013. The Education category also gained in revenue, enabling it to move into the #4 spot.

In Google Play, Games category downloads have been growing steadily over the past year. They represented about 40% of the store as of Q1 2013, comparable to the coverage seen in the iOS App Store. The Social category also had a solid gain in downloads and now ranks within the top 5. 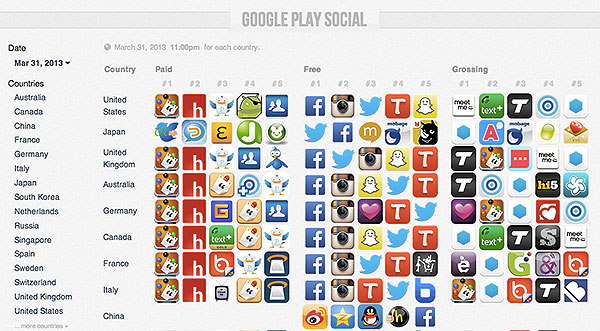 Social apps are driving real downloads growth on Google Play. A snapshot of the rankings on March 31, 2013.
Click here to access this interactive chart for free.

Want the latest news and insights about the app economy?