With Game Developers Conference 2013 just on the horizon, we want to bring you the hottest mobile gaming properties of the past month across both the iOS App Store and Google Play. Starting this month, we are now splitting up the App Annie Index into two parts: a Games Index and an Apps Index (i.e. everything but games). This will provide you with more focused insight into the different publishers and apps that are leading the app stores today.

A few years ago, the top charts on Facebook, iOS, mixi and Tencent were largely resource management games. From managing farms to running cafes, a whole host of these games from hundreds of top publishers dominated casual gaming East and West. Fast forward to 2013, and the last few months (particularly this month’s) tell a story of a new page in casual gaming on mobile (if you can still call it casual).

The category definitions on iOS and Google Play don’t match up 100% (they cross like a Venn diagram across categories). However, even at the top end of the stores, some trends are beginning to emerge and it’s definitely trending towards midcore games that either make you think or involve a fair amount of dexterity.

In the “make you think” category, the games topping the charts include strategy games like Clash of Clans (Supercell) and Kingdoms of Camelot (Kabam), brain / puzzle / word games like Candy Crush Saga (King.com), Puzzle & Dragons (GungHo Online) and LINE POP (NHN). In the “make you move” category, we have many more twitch-based games such as Temple Run 2 (Imangi Studios), Subway Surfers (Kiloo) and Angry Birds (Rovio) which you would find in the Adventure, Arcade and Action categories.

German publisher LOTUM GmbH entered the rankings for the first time, coming in at number 4. The company’s new word-guessing game, 4 Pics 1 Word, proved to be a hit with versions available across many languages: Dutch, English, French, German, Spanish, Portuguese, and Russian (and subsequently Italian, launched in March).

Imangi Studios came in first this month, thanks to the success of Temple Run 2. The publisher occupied the #1 and #2 rankings on Google Play and iOS, respectively, as its game has been popular across both platforms. Italy Games moved up five spots to enter the top three, driven by the success of Zombie Smasher. A few other companies entered the Top 10 this month, including Gameloft, which moved up six places to take the number five rank. South Korea’s WeMade Entertainment experienced the largest boost, moving to number eight after ranking #29 in January.

Supercell moved back into the top spot globally this month with the combined strength of its two apps, Clash of Clans and Hay Day. Electronic Arts held fast at third place and GREE moved up a spot to take the number 5 ranking. DeNA entered the top 10 after ranking number 13 in January 2013.

South Korean and Japanese publishers swept this month’s rankings. South Korean publishers WeMade Entertainment and 4:33 were the fast movers, rising up to the third and seventh spots, respectively.

South Korea, home to Samsung, is a unique country in that its consumers gravitate much more towards Google Play than the iOS App Store. Meanwhile, Japanese consumers actively use both app stores. Not surprisingly, the publishers who succeeded in making the top 10 across both app stores were all headquartered in Japan: GungHo, GREE, and DeNA.

GungHo Online's commercial success on the app stores has not gone unnoticed. On March 25, 2013, Japanese telecommunications firm SoftBank Mobile announced that it plans to increase its stake in GungHo from 33.6% to 58.5% in April. GungHo Online will then become a subsidiary of SoftBank Mobile. As mentioned in App Annie’s World Series of Apps: Japan report, Softbank Mobile is the third largest mobile network operator in Japan, after NTT DoCoMo and KDDI.

This month’s iOS game downloads were largely driven by Adventure, Action, and Puzzle games. Temple Run 2 kept its top spot, which it already attained in the previous month.

Supercell’s Clash of Clans, which has long enjoyed success in revenues, entered the Top 10 based on downloads this month. The game moved up 4 spots to take the #7 ranking.

LOTUM GmbH’s 4 Pics 1 Word game and RedSpell’s What’s the Word? game both entered the Top 10 this month. The two games are quite similar and it will be interesting to see how the two companies differentiate the products over the coming months and if they incorporate more social features. 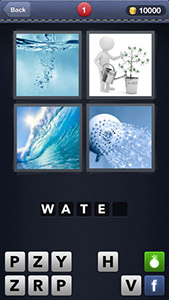 Funship’s Find Something is the only game in this list from an Asian publisher. Driven by its popularity in China, it took the number nine spot this month, after finishing number 30 in January’s Index. The hidden object game distinguishes itself through its distinct graphics, storyline, and stage-based game play.

Additionally, three apps that had been released over a year ago vaulted into the top 10 in February 2013, coinciding with price changes and iTunes home page promotions. Chair Entertainment’s Infinity Blade, released December 2010, made its game free on Valentine’s Day and was featured on the iTunes home page across numerous countries for one week. It saw a spike in its rankings during that time, as shown in the App Annie Store Stats chart below. 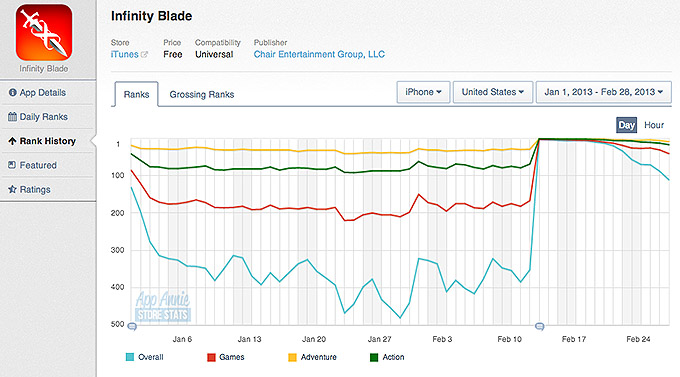 Similarly, Fishlab’s Galaxy on Fire 2 HD, initially released October 2011, became a free app on February 7 and was featured on the iTunes home page around the world for one week. Its rankings jumped during this time as well 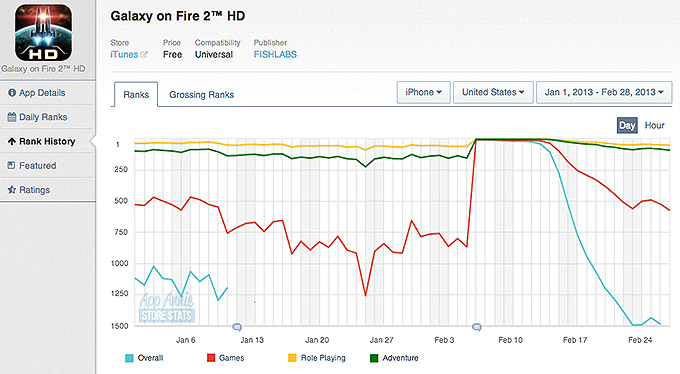 Finally, EA’s Plants vs. Zombies, launched February 2010, also became a free game on February 21 and was featured for one week on the iTunes home page across numerous countries. 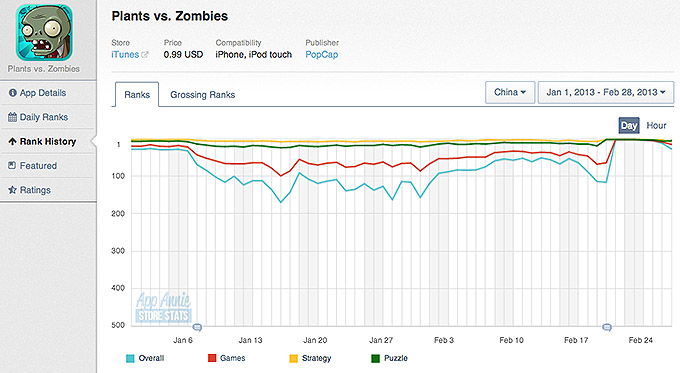 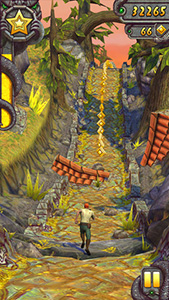 Italy Games’ Zombie Smasher and WeMade’s Windrunner (윈드러너) both experienced large jumps to take the number 4 and number 5 rankings, respectively. Both apps were released in late January and were at the top of the charts throughout February.

Electronic Arts already had launched The Simpsons: Tapped Out in the iOS App Store a year ago. On February 7, EA successfully brought this simulation game over to Google Play and promptly landed in the top 10.

February was an exceptionally stable month with no change in the top six apps. Puzzle & Dragons continued to lead the charts, as it did the previous month. Kabam’s two hits, Kingdoms of Camelot: Battle for the North and The Hobbit: Kingdoms of Middle Earth, moved up to take the #7 and #8 rankings.

Puzzle & Dragons remained the top-grossing app across both the iOS App Store and Google Play in February 2013, as in the previous month.

The Kakao platform continued its success in South Korea, boasting five of the ten games in this list. CJ E&M’s popular car-crashing game, 다함께 차차차 (Everybody Cha Cha Cha) for Kakao, held steady at #2. WeMade’s 윈드러너 (Windrunner) for Kakao, which was launched January 28, moved up quickly to take the #3 ranking. 히어로즈워 (Heroes War) for Kakao by Com2uS debuted at number eight. Com2uS explained to App Annie:

“We've managed to design and engineer the success of ‘히어로즈워 (Heroes War) for Kakao’ on Google Play through a few strategies. First and foremost, we wanted to make a game that catered well to hardcore RPG gamers who have been used to playing online web games, but are now shifting to mobile.

Second, in terms of game design and content strategy, we really took seriously all customer feedback down to the finest detail. And then finally, we centered our distribution strategy around the Kakao platform, which allowed us to not only acquire a large proportion of the Korean hardcore gamers, but also attract a large casual user base.” 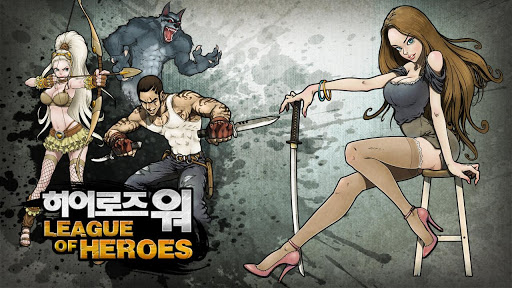 히어로즈워 for Kakao from Com2uS debuted in top 10

King.com’s Candy Crush Saga was the only Western-produced title in the Top 10.

For those of you who also are looking forward to an update on apps other than games, stay tuned!
We’ll be publishing the App Annie Index: Apps report later this week.