App Annie Index: Games - ’Tis the Season of the Sequels

The App Annie Games Index brings you the hottest mobile gaming properties across both the iOS App Store and Google Play based on market data from App Annie Intelligence.  To find out what’s happening with apps outside of games, please check out our November 2013 Apps Index.

Despicable Me continued to drive iOS downloads for Gameloft, but the publisher had an astonishing three additional games reach the Top 10: Asphalt 8 Airborne, Thor: The Dark World, and GT Racing 2.  These four games helped Gameloft lead all publishers in iOS game downloads for the first time since July 2013.  Gameloft could be in for the long haul if these newcomers have anywhere near the same longevity as Despicable Me.

China-based publisher Tencent, already a staple of the iOS publisher by game download rankings, has now broken into the Top 10 in revenue in November.  Tencent’s growth was driven primarily by 天天酷跑 (WeRun) and 欢乐斗地主 (Fight the Landlord).  Tencent's momentum continues to build as they are beginning to achieve their revenue potential via Tencent’s WeChat Game Center.  This is similar to the success LINE and Kakao have had monetizing games through their chat platforms.

After a brief slowdown following the summer season, children’s game publishers saw a bump in November downloads.  Publisher Tiny Piece reached #1 in Google Play downloads and also improved their iOS download ranking.  Fellow children’s game publisher Bluebear made their first appearance in the iOS Top 10 downloads in 2013.  Top games by these publishers involved fashion, salons, and science-for-fun.  Since children’s games performed especially well during the summer in the Northern Hemisphere, it will be interesting to see what the genre achieves with many kids also off from school during the winter holiday season.

Many of the top games in this month’s Index were sequels to other successful mobile titles, including: Plants vs. Zombies™ 2, My Talking Tom, NinJump Rooftops, Asphalt 8 Airborne, and GT Racing 2.  These titles help illustrate the benefit of having familiar characters and a built-in fanbase carry over from one game to the next.

Gameloft was the number one publisher in monthly iOS game downloads for the first time since July 2013.  In addition to the continued success of Despicable Me, three global releases across late October and November helped the publisher reclaim the top spot: Thor: The Dark World, GT Racing 2, and Tank Battles.  Tank Battles, soft launched back in June, was featured on the iTunes homepage in over 100 countries in November.  Players take part in General McTankerson’s Worldwide Tournament of Tanks, trying to defeat other tanks in a wide range of missions.  Gameloft also benefited from an increase in Asphalt 8 Airborne downloads, which coincided with the game’s price decreasing from $0.99 to free in early November.

Two publishers moved up in this ranking primarily due to children’s games, as Ireland-based Bluebear joined mainstay children’s publisher Tiny Piece on the list.  Bluebear’s downloads increased primarily due to the releases of Crazy Shave, Shave Santa, Eye Doctor, and Nose Doctor in October and November.  Bluebear CEO Martin Harte spoke with App Annie about the publisher’s success and outlook:

"We are delighted with the success of Crazy Shave and Nose Doctor. It builds on the earlier successes of the company and reflects on the quality of the team we have assembled. We've listened to our users and put an emphasis on quality and innovation within our space. In November some of that hard work has started to pay off. We will continue on our mission to create premium interactive titles for kids and casual players, and to become synonymous with the best games available. We have a fantastic product lineup ahead of us, and with our plans for continued expansion of our successful core team, we are extremely excited about the future." - Martin Harte, CEO of Bluebear Technologies Ltd. 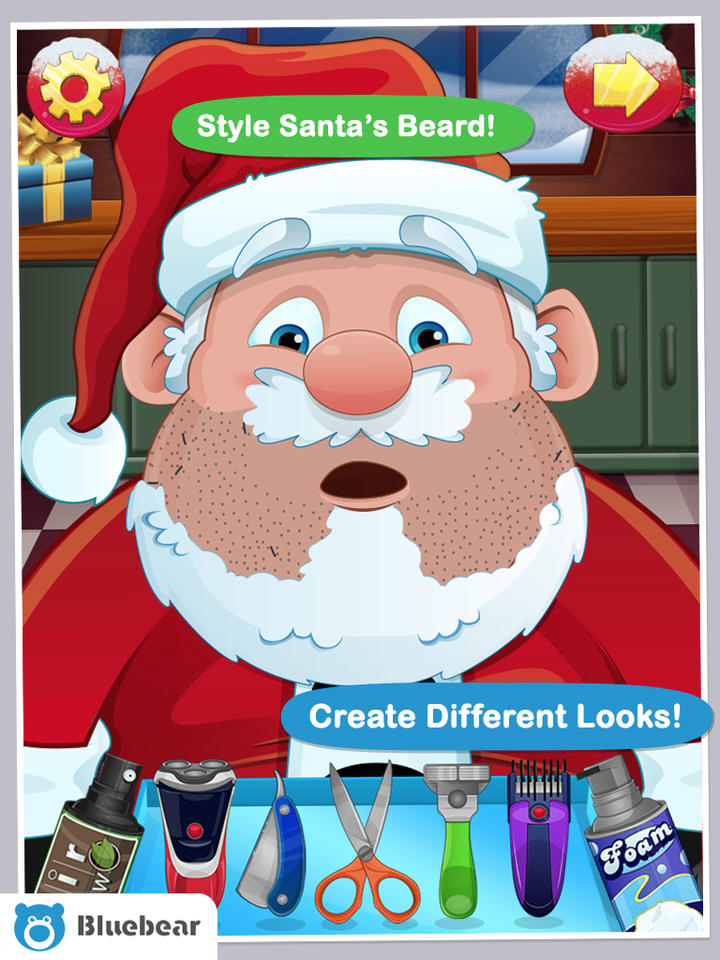 Kids can give Saint Nick a trim in Shave Santa.

* Rank change from October to November 2013 is not available because of changes in publisher attribution.

Electronic Arts had a strong November 2013 for Google Play game downloads following the long-anticipated late October release of Plants vs. Zombies™ 2 on Google Play, as well as the publisher’s wide release of two Monopoly-theme titles in November.  Electronic Arts teamed up with Hasbro for MONOPOLY Slots and MONOPOLY Bingo, which were both soft-launched in September.  As discussed above, this is another example of the importance of recognizable IP performing well.

The October Games Index already noted how Tencent demonstrated the enormous potential of the mobile gaming market in China through its rapid success in iOS game downloads.  In November, Tencent realized more of their monetization potential by moving into the Top 10 iOS publishers by game revenue.  Much of their revenue spike came from further growth of side-scrolling endless runner 天天酷跑 (WeRun) and of 欢乐斗地主 (Fight the Landlord).  欢乐斗地主 (Fight the Landlord) is a popular card game in China that originally launched in August 2013, but became a big success in October.  Tencent attributed their overall success to viral adoption through social engagement. 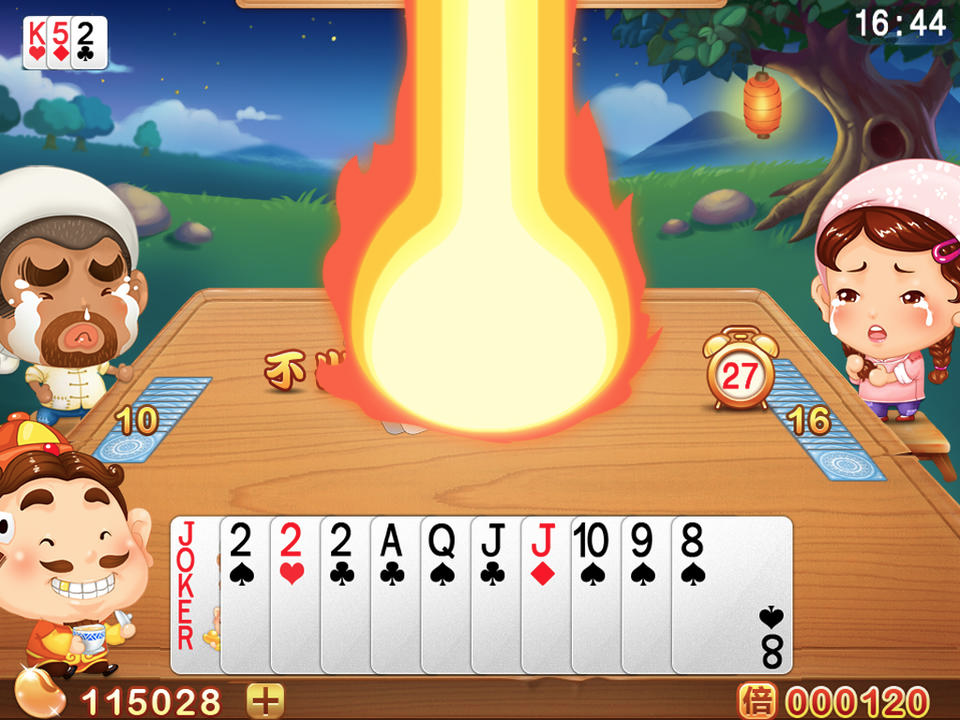 A perennial chart-topper on iOS, Supercell entered the Google Play Top 10 in November.  This was due to the successful launch of Clash of Clans on Google Play in October and its continued growth in November.

LINE held a spot in the top five publishers as they celebrated the one-year anniversary of LINE GAME - the gaming platform on which hit games such as Pokopang and LINE WIND runner operate.  According to the publisher, the platform grew to support 19 game titles and over 220 million combined downloads in its first year of operation.  As part of the celebration, users could download LINE POP in order to receive an original set of LINE stickers.  This promotion was accompanied by an increase in the game’s downloads in mid-November.  With the release of several titles in late November and early December, including the classic Puzzle Bobble, things look bright for the second year of LINE GAME. 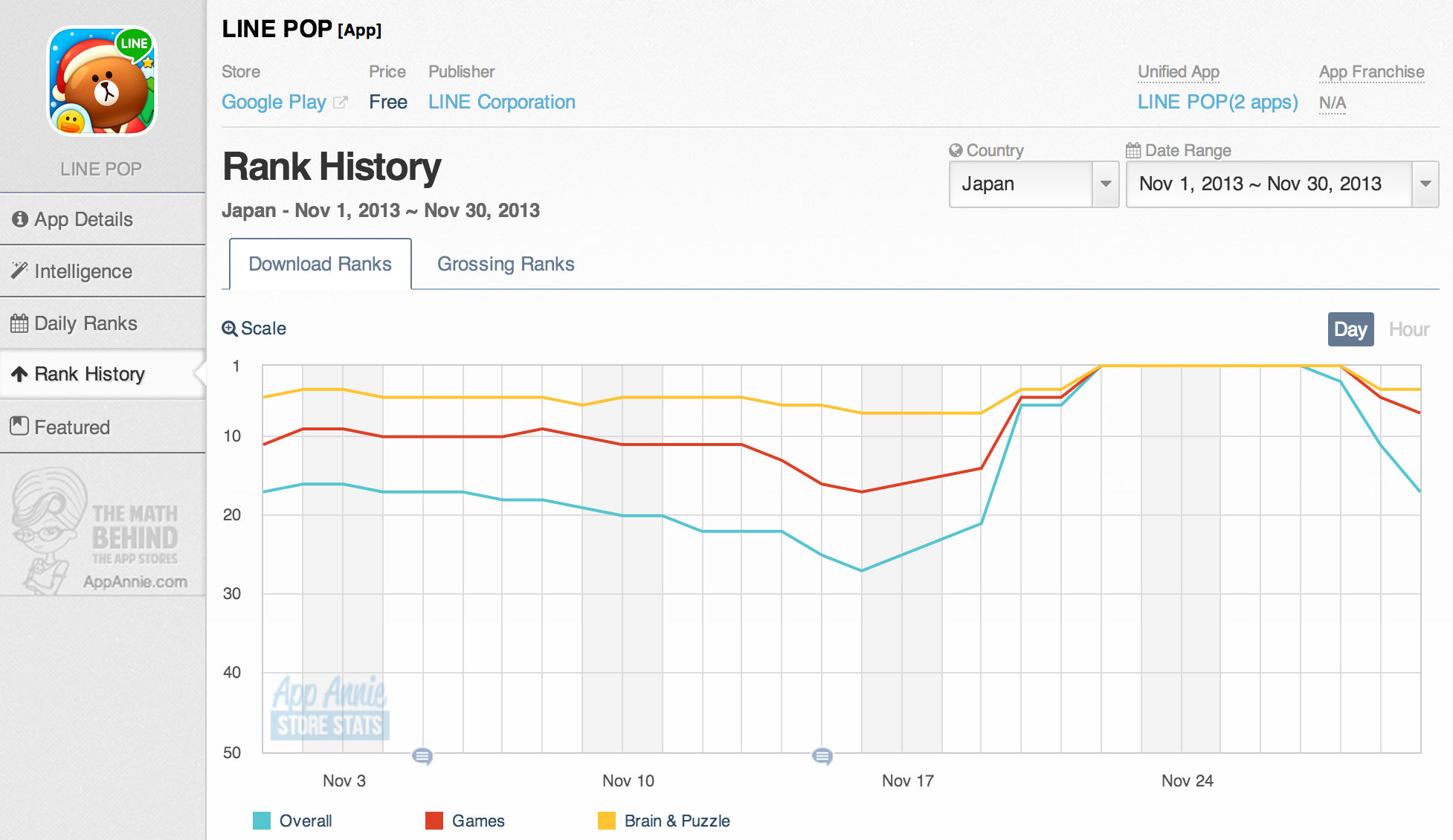 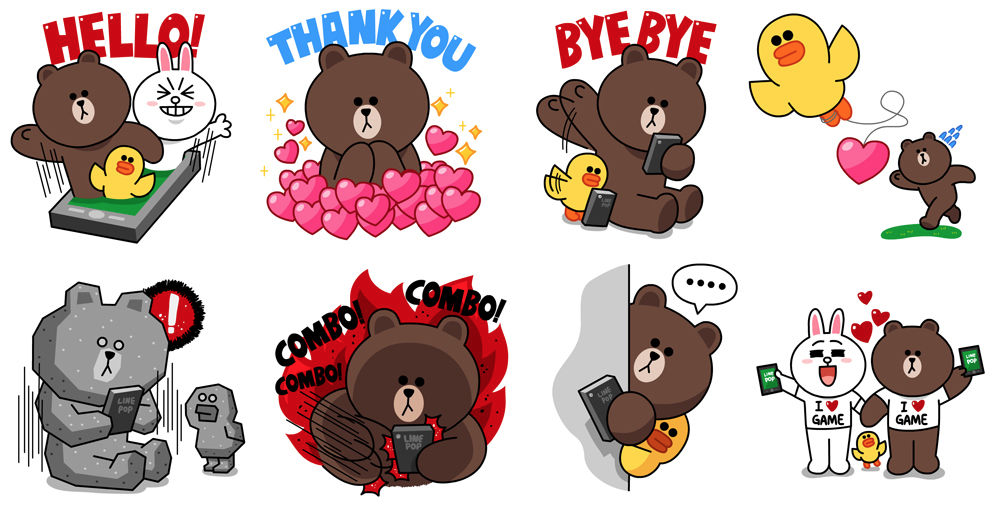 Special stickers from LINE for a job well done.

A number of new games entered the Top 10 games by iOS downloads in November.

Outfit 7 has had extended success with Entertainment apps in the Talking Tom series, which let users play with a virtual pet cat named Tom.  In November, the publisher replicated that success in the Games category with the release of My Talking Tom.  This new game lets players adopt a baby Tom and nurture him as he grows.

Despite only launching in late November, Clumsy Ninja still made it into the November Games Index.  Like My Talking Tom, this game also focuses on developing a virtual character, though this time it’s a ninja in training rather than a growing kitten.

Another new game to reach the Top 10 for iOS downloads was GT Racing 2.  It is the second game in Gameloft’s GT Racing series for mobile devices, following GT Racing: Motor Academy.  With the late October release of Thor: The Dark World, Gameloft had an impressive 4 of the Top 10 in November iOS game downloads, including two licensed tie-ins with popular 2013 films.

Hasbro’s NinJump Rooftops, also released at the very end of October, is an endless running game and the second entry in the series following the original NinJump.  The sequel has a few differences from the original, primarily that it is now a side-scrolling game, rather than the vertical climbing of the original.

Plants vs. Zombies™ 2 was launched on Google Play in late October, three months after its iOS release.  In November, the game reached the top five on Google Play.  It was also featured on the Google Play homepage in several countries throughout the month.

My Talking Tom completed a hugely successful launch month by entering the Top 10 game downloads not only on iOS, but also on Google Play. 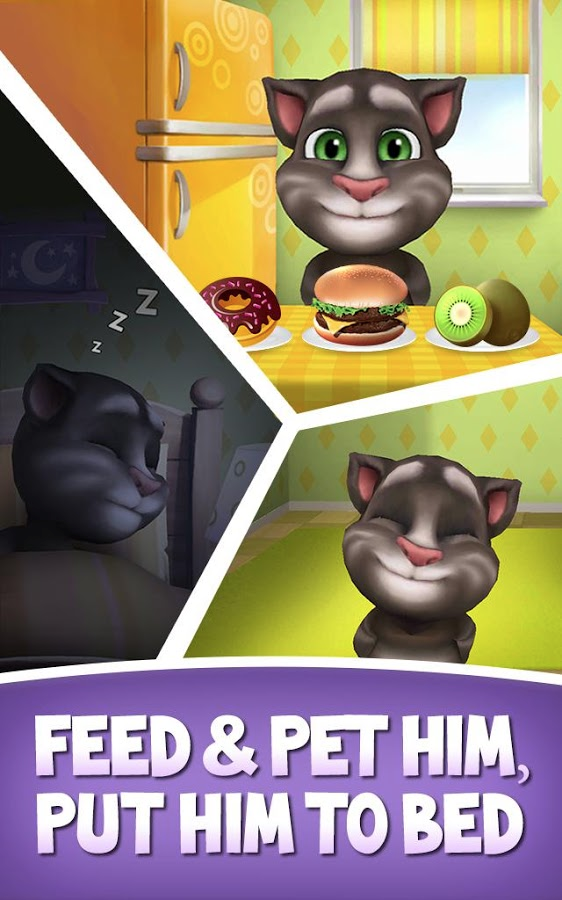 Users get to raise a baby version of Outfit 7's franchise star in My Talking Tom.

天天酷跑 (WeRun) already reached the #1 position in the previous Games Index for its iOS downloads.  By November 2013, this side-scrolling endless runner from Tencent also was monetizing well, reaching the Top 10 in iOS game revenue.

Already released on iOS well over a year ago, Clash of Clans made a strong debut performance on Google Play in October, which was followed by additional revenue growth in November.  This is one of the few games to have blockbuster crossover success in the two very different countries of the United States and Japan.  With the game showing strong legs on Google Play and with Supercell adding holiday-themed elements in early December, Clash of Clans is poised for a strong finish to 2013.

Kakao continued to be a strong platform for gaming in South Korea and a critical component for publishers looking to expand internationally into the country’s lucrative market.  Pokopang, already one of the most popular games in Japan, was the latest success story.  Released on the Kakao platform in October, the game saw significant growth in Google Play revenue in South Korea from October to November.

For those of you who also are looking for an update on top apps other than games, please check out the November 2013 Apps Index.