The App Annie Games Index brings you the hottest mobile gaming properties across both the iOS App Store and Google Play. To find out what’s happening with apps outside of games, please check out our Apps Index.

In April 2013, as in the months preceding, three games continued to dominate the charts across iOS and Google Play - Clash of Clans, Puzzles & Dragons and Candy Crush Saga. The first two of these games have been near or at the top of our Index since we started the report back in October 2012, with Candy Crush Saga emerging in November - it’s interesting to see that these hit games have been able to maintain and retain their audiences while monetizing them at a remarkable rate.

In the publisher charts, there were a few companies that made significant inroads up the Index rankings in April - Ninjafish, Gameloft, SEGA, Orangenose Studios, King and COLOPL among the gainers. In the app charts, games like Sonic Dash, Hardest Game Ever 2, Toy Truck Rally 3D and MANUGANU were the biggest movers. Action and Arcade games continued to dominate game downloads, while Casual, Puzzle and Simulation games made up a good chunk of the top grossing games.

* As mentioned in last month’s Index, NHN has split its subsidiary NHN Japan, which developed hit messaging app LINE, into LINE Corporation and NHN Japan Corporation. Starting with this April 2013 App Annie Index, LINE and NHN Japan have now been removed from NHN publisher totals, and all three publishers are being reported separately. NAVER Japan numbers are being reported under the publisher LINE. As a result, rank change vs. March 2013 is not available for these three publishers.

Electronic Arts maintained its number one spot for the third month in a row, while King kept its number three ranking from March 2013 based on the strength of its two games. Elsewhere in the chart, however, were notable shifts in the publisher rankings, due to a combination of new game releases and price promotions:

As footnoted in the table above, LINE is being reported on its own in the Index now. The publisher rounded out the top 10 as its current assortment of games continued to perform well and as it successfully introduced a new match-3 puzzle game called LINE JELLY - a format that certainly has been working well elsewhere in the app store. While LINE’s iOS games were generally strongest in Japan, they also drew audiences in Thailand, China, and Taiwan.

The Google Play publisher rankings were overall more stable than the iOS publisher rankings. King was the biggest mover with a four-spot increase to take the number five position. The company’s cross-platform success across the iOS App Store, Google Play, and Facebook has now enabled it to reach over 70MM total daily players.

It’s interesting to note that in April, six of these top 10 Google Play publishers were European - a list that was the least dominated by United States and Asian publishers.

The publisher rankings in April were very similar to those in March, as there were not significant changes in the top-grossing iOS game apps.

Supercell and GungHo Online ranked at the top of the charts for yet another month. While Supercell has been impressive because of its widespread appeal and success in reaching the top of the charts in numerous countries around the world with two big hits, GungHo Online has been impressive for the exact opposite reason. The vast majority of its recent revenue has come from a single game, Puzzle and Dragons, with most of the game’s revenue coming from one country, Japan.

With LINE and NHN now being reported as separate publishers in the App Annie Index, we saw LINE coming in at #4 with offerings such as match-3 puzzle games LINE POP and LINE Bubble! and endless running game LINE WIND runner. Meanwhile, NHN rounded out the top ten with games such as 피쉬프렌즈 (Fish Friends) for Kakao and 우파루마운틴 (Wooparoo Mountain) for Kakao.

COLOPL rose up four spots with growth across multiple games, particularly プロ野球PRIDE (Professional Baseball Pride), 秘宝探偵 (Treasure Detective), and クイズRPG 魔法使いと黒猫のウィズ ((Quiz RPG) Magician and Black Cat Wiz). The last of those three games resembles Puzzle & Dragons in that the player must answer quizzes in order to attack the monsters.

* The following games were released in April 2013, so they had no Rank Change vs. March 2013: Injustice: Gods Among Us, Dentist Office, Iron Man 3, Draw Rider, Real Basketball.

As was the case in March 2013, the top-ranking games in April were mostly Arcade and Action games. Candy Crush Saga captured the top spot again, while Real Racing 3 continued to perform well and remained in the top ten for another month. Over the past few months, the top 10 downloaded iOS games have typically included a couple of new games that debuted near the top of the charts. This month, however, quite a few games were launched in April and shot up quickly to the top: 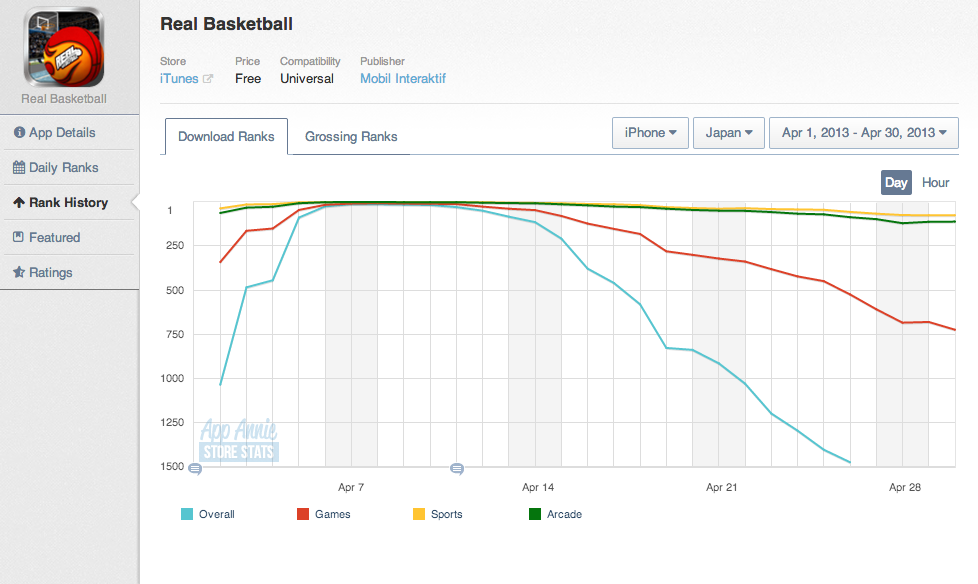 A couple of games that were launched in March subsequently broke into the top 10 in April:

While most of the top-ranking games were relatively new, Fruit Ninja was the exception, as this classic was released three years ago. Coming in at number 10 in April 2013, this game reflected a couple of trends that we have seen in past App Annie Index reports. Its spike in the rankings coincided with a price change from $0.99 to free on April 11, as well as broad feature placement on the iOS App Store Home Page across over 150 countries from April 12 to 17. 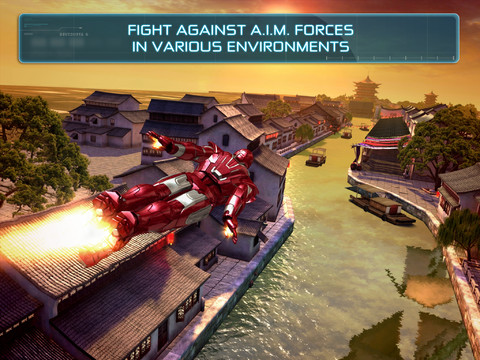 Similar to what we saw in the iOS App Store, the Google Play top 10 rankings in April were dominated by Arcade & Action games, as they have been the last few months. These top-downloaded apps also continued to come primarily from publishers headquartered outside of Asia.

In this month’s rankings, Candy Crush Saga moved up two spots to take the number one position, partly from its notable growth in downloads in Taiwan. Candy Crush Saga now owns the top-downloaded spot across both the iOS App Store and Google Play platforms.

Newer games that were released in March 2013 and rose into the top 10 in April included 3dinteger's Toy Truck Rally 3D, Lima Sky's Doodle Jump, and MANUGANU by Turkish publisher Alper Sankay. MANUGANU’s rise in the rankings coincided with its being featured on the Google Play Home Page as a Staff Pick from April 6 to 18 across over forty countries. 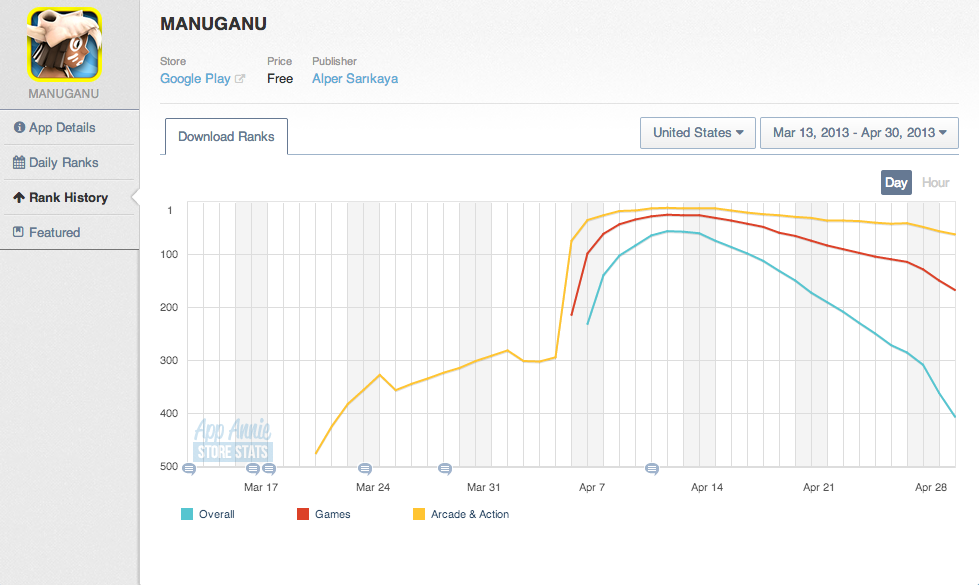 The highest-grossing iOS games have had a lock on the app store this year, as the top 5 have remained the same for each month from January through April 2013. Now #6 has remained the same since March as well. Puzzle & Dragons continued its run at the top for another month.

At the end of April, its publisher GungHo Online announced that the smash hit game had achieved 13MM cumulative downloads across the app stores. In terms of revenue, GungHo Online indicated that mobile games contributed 94% of its total Q1 2013 revenue. Given that the publisher brought in about $119MM in revenue in the month of April 2013, one can get an idea of the magnitude of Puzzle & Dragons’ success, given that it is their main successful mobile game. CEO Kazuki Morishita said to App Annie:

“While we don't comment about our revenues, we are excited to see so many consumers engaged with "Puzzle & Dragons" all over the world. We've leveraged our experience in the online gaming space to make what we call "online games for smartphones" as a native application. And clearly, these kinds of games are receiving widespread and mainstream acceptance from gamers worldwide. We'll just continue to focus on making fun games in the future.”

Minecraft continued its run in the top 10. Priced at $6.99, the cult favorite is unique in that it is the only paid app in this list. Kabam’s The Hobbit also remained in the top 10. In addition to Supercell, Kabam was the only other publisher that scored two games in the top 10. 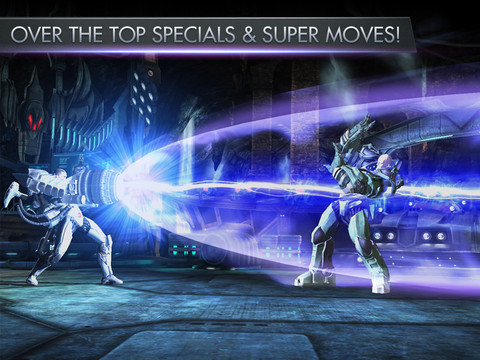 Injustice: Gods Among Us debuted in top 10 by both downloads and revenue

Similar to recent months, April’s top-grossing Google Play games mostly continued to come from publishers in Japan and South Korea, with games for the latter being distributed on the Kakao platform. And as before, the top games were mostly Casual games, along with some Brain & Puzzle and Arcade & Action games. Most of the hit games were relatively new, having been available in Google Play for half a year at most; the only exceptions were Blood Brothers (RPG) and Puzzle & Dragons, both released prior to October 2012.

At the top of the chart, Puzzle & Dragons and Windrunner for Kakao maintained their positions from the previous month. Remarkably, Puzzle & Dragons has been the #1 grossing Google Play app in Japan each day since October 11, 2012. Candy Crush Saga continued its steady march upwards, taking the number three spot in April. Back in late February, publisher King announced that it would be bringing the hit game to the key Asian markets of Japan and South Korea.

While Candy Crush Saga grew its revenue across a number of countries in April, revenue has started to rise in the country of Japan in particular. While most of the top-ranking games in April already had made the top 10 in March, three were new to the top 10 in April:

For those of you who also are looking for an update on apps other than games, please check out the Apps Index.