The App Annie Apps Index brings you the top-performing publishers and apps outside of games across both the iOS App Store and Google Play based on market data from App Annie Intelligence.  To find out what’s happening in game apps, please check out our November 2013 Games Index.

While much of the recent buzz about the Social Networking category on the iOS App Store has surrounded the battle for supremacy among the messaging apps, it was dating apps that made the big moves in iOS App Store revenue in November. AdoptAGuy’s unique women-centric approach helped it join the Top 10, while Zoosk and Grindr both climbed further up the ranks. With Badoo also holding strong, dating apps provided 4 of the Top 10 apps outside of games by iOS App Store revenue in November.

iOS downloads excluding games were dominated by companies from the United States and China, with the two countries combined representing 9 of the Top 10 publishers.  This is especially impressive for the four Chinese publishers, as the quadrumvirate reached the top of the global chart while drawing the vast majority of their users from China. 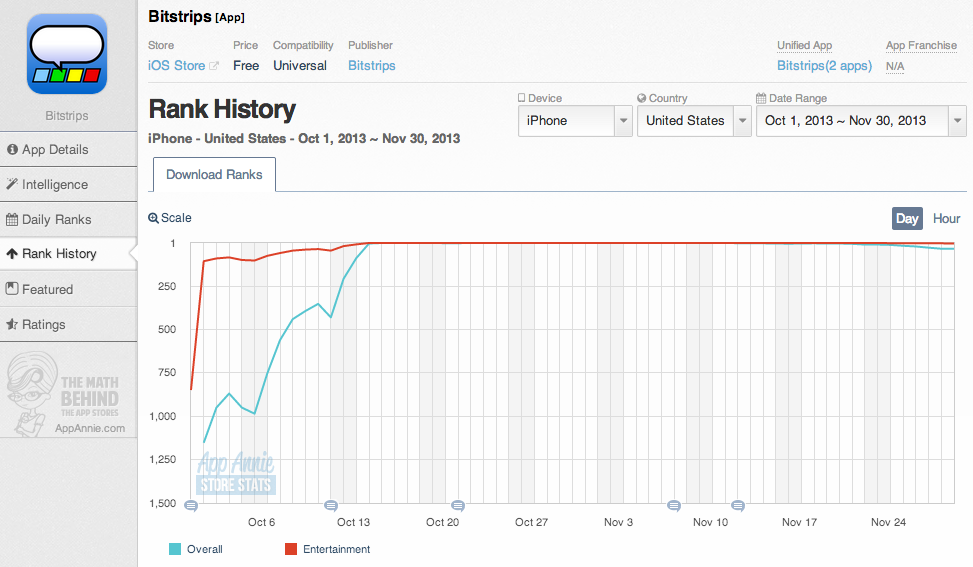 Bitstrips made rapid gains after its release in late September, and reached #2 in iOS App Store downloads for November.

Chinese e-commerce giant Alibaba also joined the Top 10 publishers for iOS downloads this month. Alibaba Group was boosted by the success of instant messaging app 来往 (Lai Wang, Contact), as well as a good month for shopping app 天猫(淘宝商城) (Tmall) in China. The success of  天猫(淘宝商城) (Tmall) followed the release of an iOS app update, and came as Alibaba broke its one-day sales record on China’s Singles’ Day. While Alibaba have found success with their own apps, they’ve also been proactive about extending their influence beyond their base in China. In November, Quixey, a Silicon Valley-based search engine for apps, announced a $50 million funding round led by Alibaba. An IPO on a foreign stock exchange may also be on the cards for Alibaba, though the company states the location is yet to be determined, despite rumors of a listing in either Hong Kong or New York.

Twitter continued their momentum from October in Google Play, which followed the release of an updated Android app optimized for tablets. The updates continued in November as Twitter improved search functionality and provided users with filters to narrow searches to pictures, videos, or tweets from friends. The step up in Google Play download rankings topped a good month for Twitter, led by a successful IPO on November 7, which valued the company around $25 billion.

Smule made gains in the iOS App Store revenue Top 10 rankings for the third consecutive month thanks to their array of Music apps, which includes Sing! Karaoke, Magic Piano, and Guitar. Comics publisher comiXology also continued their momentum from October as their in-app comic sales continued to prove popular with iOS users. comiXology will be looking to gain further in the coming months after a recent deal that saw the publisher team up with eBay to launch a digital comic marketplace. Purchases will initially be handled via desktop, but users will require a comiXology account and can access content through the Comics app.

Pandora had a strong month in Google Play, driven by their streaming radio service in the United States. This followed the release of the Pandora app specifically designed for Android tablets in late October. Pandora extended the functionality of their apps further in November by adding compatibility with Google’s Chromecast device, allowing users to stream music from Pandora to their TVs and use their mobile devices as remote controls. The company’s efforts in mobile appear to be paying off - in addition to in-app purchase revenue, Pandora announced mobile advertising revenue in excess of $100 million for the quarter ending 31 October 2013.

"Kakao has developed into an innovative social platform that offers a wide range of content and services by building on the overwhelming number of users, traffic, and social networking power of KakaoTalk. 2013 was an exciting year of platform developments that included new applications that work in tight integration with KakaoTalk.

In September, Kakao added two new apps to its mobile social platform: a private social networking service called "KakaoGroup" and a social music service called "KakaoMusic."  KakaoGroup is a private group SMS where users can post thoughts, memories, and photos to a private group of people. KakaoMusic is a new type of mobile music service that allows users to share and communicate through music with KakaoTalk friends. By combining "personal stories" to songs and communicating through music, the app gained seven million downloads in less than three months since launch. It has quickly become the 2nd most-used music application in Korea, and is expected to change the way people consume, listen to, and associate with music." -Sonia Im, Communication Team, Kakao

魔漫相机(MomentCam), an app by Chinese publisher Hightalk Software that transforms photos into comics, launched in late October and found almost immediate success in China. Despite having no English language support initially, the app still made steady gains in markets outside China, such as the United States and United Kingdom. November saw an update that introduced English language support, which provided an additional boost in these markets. 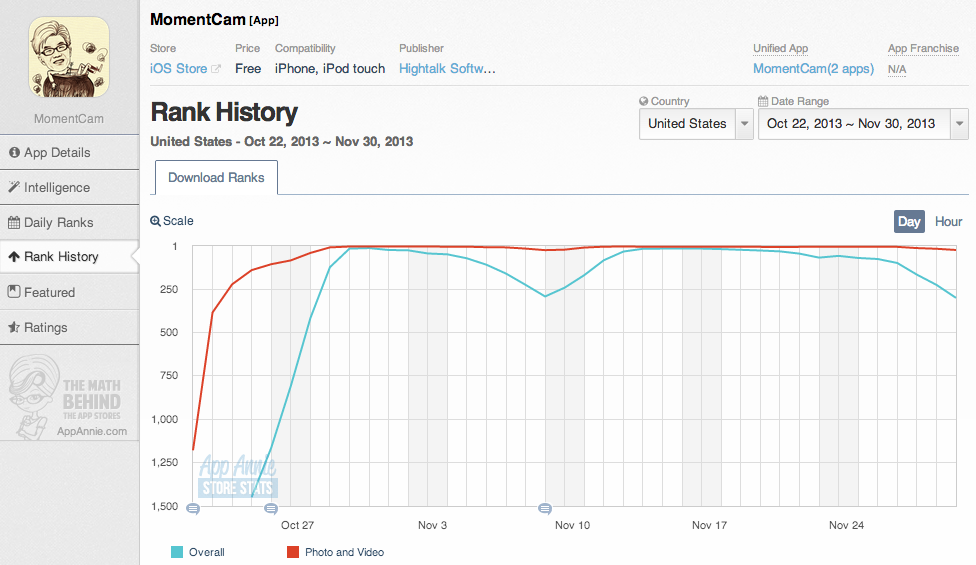 English language support in 魔漫相机 (MomentCam) provided a boost to its rank in the United States in November.

With continued viral success in China and Taiwan, 魔漫相机 (MomentCam) reached the #1 spot for iOS App Store downloads excluding games in November, with Hightalk Software the first Chinese publisher to achieve this in the Apps Index in 2013. The app has reportedly attracted around 3.25 million subscribers per day.

Bitstrips is an app that also allows users to create custom comics that include cartoon versions of themselves and their friends using regularly updated templates. The app makes heavy use of social networking, allowing users to post comics to Facebook, and saw strong popularity in the United States and United Kingdom throughout November. 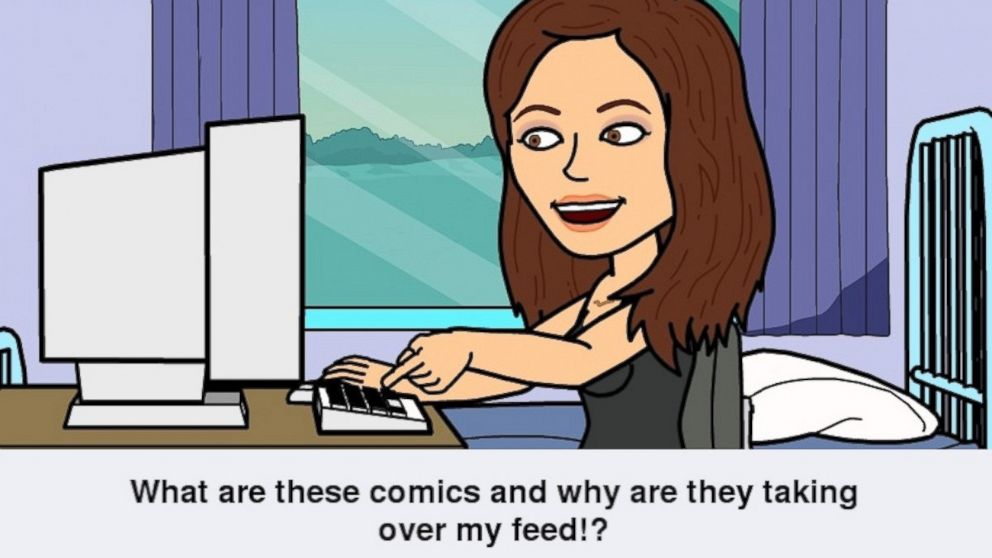 The integration of Bitstrips with Facebook has proved popular with app users.

Facebook released a major update to their Facebook Messenger app in November, the latest move in the ongoing messenger app wars. The update introduced the ability for users to message contacts in their phone outside of their Facebook friends list, allowing it to act more like an SMS replacement service. Facebook Messenger’s climb to #4 in October gave Facebook three of the top four apps outside of games for Google Play downloads.

* Previously, the LINE PLAY app was in the Games category. As a result, it did not have any rank among apps excluding games in Oct 2013. The publisher has since shifted this app to the Social Networking category on iOS and to the Social category on Google Play. Accordingly, this app is now being reported in the Apps Index. Please see the footnotes at the end of the App Annie Index for more information on app categorization.

The three apps to move up the iOS App Store revenue ranks in November were all dating apps.  With the continued strength of Badoo, that meant that 4 of the Top 10 apps were for dating. AdoptAGuy entered the Top 10 with a unique twist that focuses on giving women control - female users select men in an e-commerce supermarket style, complete with shopping carts and checkouts. The app performed particularly strongly in France where its publisher is based. 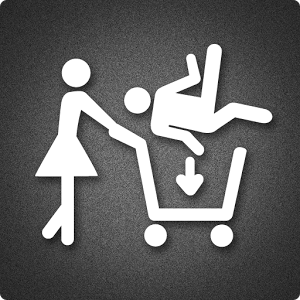 AdoptAGuy’s cash registers were busy with its unique take on dating apps.

Zoosk moved into the top three apps for iOS revenue in November, which is good news given the reports of an upcoming IPO. Zoosk is another app with strong connections to Facebook, as it integrates dating and users’ social network profiles. Grindr also experienced success in November, accompanied by the release of an updated app at the end of the month. This update included the addition of ‘tribes,’ allowing users to identify themselves with niche groups, and enhanced chat features. Grindr now reports over 7 million users across 192 countries.

* Previously, the LINE PLAY app was in the Games category. As a result, it did not have any rank among apps excluding games in Oct 2013. The publisher has since shifted this app to the Social Networking category on iOS and to the Social category on Google Play. Accordingly, this app is now being reported in the Apps Index. Please see the footnotes at the end of the App Annie Index for more information on app categorization.

In November, 4 of the Top 10 apps excluding games by Google Play revenue were published by LINE, as the publisher continued to perform strongly in Japan. The publisher’s apps are boosted by the popularity of the LINE chat app, which passed 300 million downloads in November, with 80% of users based outside Japan. LINE PLAY, an avatar and virtual world app, also celebrated its one year anniversary during November. To mark the occasion, LINE announced that LINE PLAY has 13 million users across 210 countries, and offered special edition stickers for the LINE app. LINE will look to continue this success with the recently announced e-commerce app LINE MALL, to be released in the near future.

For those of you who also are looking for an update on top apps in gaming, please check out our November 2013 Games Index.