In this Apps Index, we bring to you the top-performing publishers and apps outside of games across both the iOS App Store and Google Play in March 2013. To find out what’s happening in game apps, please check out our Games Index.

Social networking and communication apps continued to drive significant revenue in March 2013, similar to what we saw in February. In general, the publishers and apps in this Apps Index have more stable rankings than those in the Games Index, where hits can skyrocket to the top and then fall just as quickly. Sizable gains were seen for a few specific apps, however:

* iPhones and iPads come with a number of built-in apps from Apple. Since built-in apps are not downloaded from the iOS App Store, they do not count towards Apple’s downloads rankings above.

In March, Google and Apple again took the top two positions, while Facebook, Out Fit 7, and Tencent again rounded out the top 5. Snapchat was the largest mover in March, moving up 20 spots to take the number 10 ranking. Other publishers that moved into the top 10 in March included Adobe and NHN, each of which jumped 4 spots.

* Some apps published by Google come preinstalled on some Android devices. Since preinstalled apps are not being downloaded from Google Play, they do not count towards Google’s downloads rankings above.

Apple and NHN maintained their #1 and #2 positions in March, while most of the other publishers had some small rank changes. The big mover this month was MLB.com. Demonstrating the seasonal impact of sports, the publisher leapt 13 spots as fans prepared for the March 31 Opening Day for United States baseball.

In March, NHN reclaimed the number one ranking. Meanwhile, GO Launcher Dev jumped five places to come in at number three. This Chinese company makes apps that allow users to customize the home screens of their Android devices. WhatsApp and Pandora both moved up the rankings as their namesake apps brought in more revenue through newly added subscription fees. Finally, fast-riser MLB rounded out the Top 10 as baseball season in the United States neared.

* iPhones and iPads come with a number of built-in apps from Apple. Since built-in apps are not downloaded from the iOS App Store, they are not included in the downloads rankings above.

This month’s top 10 included many of the same apps that ranked in the previous month. YouTube and Google Maps continued to take the top two spots in the rankings. Of the five free Apple apps that users are prompted with the option to download the first time that they access the iOS App Store using iOS 6, four remained in the top 10.

The big mover was Snapchat, which jumped up 20 spots to take the number five ranking in March, boosted by strong growth in the United Kingdom. 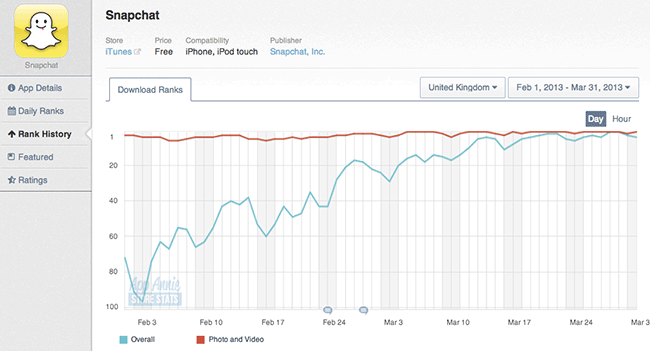 Snapchat takes off in the United Kingdom

CocoPPa from Japanese publisher SPiRE lets users add new “cute” shortcut icons for the existing apps on their iPhones. After growing steadily the past couple months, it broke into the top 10 in March with strong growth in the United States. 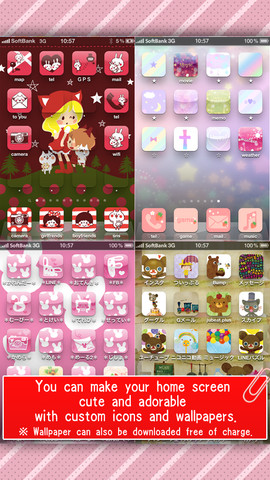 CocoPPa breaks into top 10 with its fun iPhone app icons

Skype came in at number ten after moving up four spots.

* Some apps published by Google come preinstalled on some Android devices. Since preinstalled apps are not being downloaded from Google Play, they are not included in the downloads rankings above.
Most of the top-downloaded apps in March were Social and Communication apps, as was the case in February. There was no change in the five top-ranked apps, three of which were published by Facebook.

The big mover this month was messaging app LINE, which rose five places to take the number six ranking. So far, LINE has earned much of its revenue from Japan, with Thailand and Taiwan also contributing revenue on iOS, as discussed in an earlier App Annie Index. While the app is strongest in Asia, it also has gained a foothold among some Spanish-speaking countries. In March, downloads picked up notably in Spain, enabling LINE to reach the 10 million user mark there. The app even became the #1 downloaded app in Google Play Spain for much of the month. 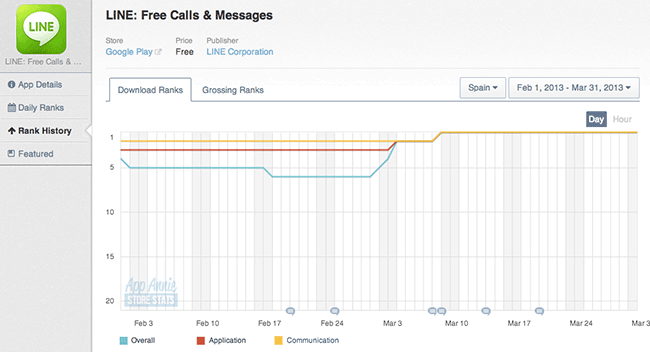 LINE becomes top-downloaded app in Spain for much of March

MLB.com At Bat, the official app for Major League Baseball, was the new entrant to the top 10 in March as March 31 Opening Day neared. Users pay monthly or yearly subscription fees for premium features such as listening to live radio broadcasts of the games. 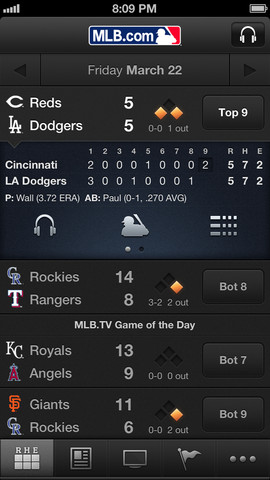 MLB.com At Bat knocks it out of the park, reaching #4 on iOS

The top-grossing Google Play apps continued to include a number of Communication apps this month. LINE was once again the top-grossing app across both the iOS App Store and Google Play, as it had been from November 2012 through January 2013.

WhatsApp Messenger has been rising steadily in Google Play revenue ever since the $0.99 per year subscription fees started kicking in (i.e. after the first free year ended for some users). The app took the #3 position in March, up from #6 in February and #108 in January.

Next Launcher 3D moved up 10 places to take the number 7 spot. Initially released in December for $15.99, this app allows users to customize the home screens of their Android devices and includes 3D visual elements. During the weekend of March 16 to 17, the app’s price was discounted 40% to $9.60. This coincided with an uplift in revenue, as shown below. 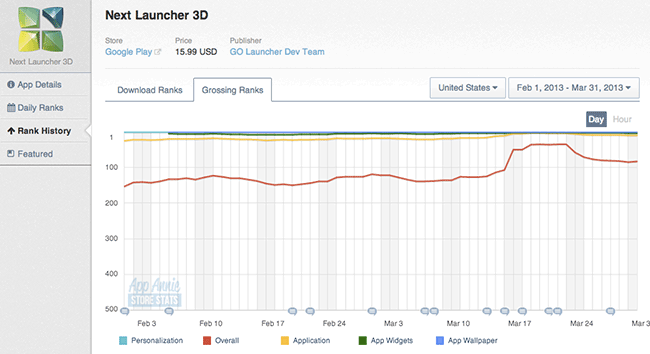 Next Launcher 3D revenue up following a weekend sale

Pandora jumped 17 spots to break into the top 10. At the end of February, the company announced that it would begin capping mobile (but not desktop or laptop) listening time at 40 hours a month. Users who want to listen on mobile devices past that limit can pay monthly or yearly subscription fees. As shown in the chart below, Pandora has been moving up the grossing ranks since. 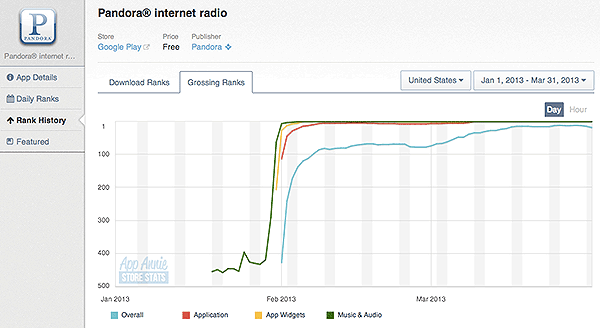 MLB.com At Bat shot up 43 spots in the Google Play revenue rankings to enter the top 10, comparable to what we saw in the iOS App Store.

For those of you who also are looking for an update on game apps, please check out the Games Index. For an update on the overall app store market in Q1 2013, read our App Annie Index market report.

Want the latest news and insights about the app economy?