The App Annie Apps Index brings you the top-performing publishers and apps outside of games across both the iOS App Store and Google Play. To find out what’s happening in game apps and the overall market, please check out our June 2013 Games Index and Q2 2013 Market Index.

Video: All The Cool Apps Are Doing It

Vine climbed three spots to overtake the #1 non-game app rank in the iOS App Store by downloads. Vine was joined by YouTube at #2, Snapchat at #3 and Instagram at #5 to give photo & video apps four of the top five iOS apps by downloads for the second month in a row. The balance between photos and video might be shifting to favor video though with Vine’s new top ranking and the announcement of Instagram’s 15-second video capture feature that generated over five million videos within the first twenty-four hours of its release. Snapchat, which is generally seen as a photo app, was actually ahead of the curve when they integrated video sharing into their app last December.

The #1 non-game app by Google Play revenue, LINE, was joined by two other LINE apps in the top ten ranking for June. LINE マンガ (Manga), a comic book app, climbed two spots into the #9 ranking to join LINE 占い (Fortune-telling), a horoscope and tarot card app that connects users with psychics. The performance of these apps and other apps for the LINE communication platform helped cement LINE’s position as the top publisher in Google Play by non-game revenue generation for June.

Google and Apple have been the top ranked publishers by non-game downloads in the iOS App Store every month of 2013. Google’s #1 rank is supported by the popularity of their YouTube, Google Maps, Gmail and Chrome apps while Apple’s ranking has been driven by apps that iOS 6 suggests you download: Find My iPhone, Podcasts, Find My Friends, iTunes U and iBooks. Baidu was the biggest mover among the top iOS App Store publishers by downloads, climbing four spots into the #4 ranking. Their performance was bolstered by Photo Wonder, 爱奇艺视频 (Love Fantastic Art Video) and Wonder Camera, which launched in the iOS App Store in mid-June. Yahoo’s acquisition of Tumblr helped spark their growth and propelled them back into the top ten after a one-month hiatus.

Facebook and Google continued to dominate the top of the publisher ranking by downloads in Google Play, ranking #1 and #2, respectively, for every month of 2013. WhatsApp reached its highest ranking of the year and landed at #3 after experiencing significant growth in Mexico. Tencent broke into the top ten non-game iOS publishers by downloads on the back of an expanding market for its popular chatting app, WeChat. Tencent saw the biggest growth for WeChat in Mexico, the Philippines and India, three of the markets they decided to target with new ads featuring international soccer star Lionel Messi.

Pandora held onto the #1 rank for the third straight month, bolstered by a strong performance in the United States iOS market. LINE climbed one spot into the #2 position in June after announcing that they passed 150 million worldwide users at the beginning of May. Microsoft also climbed four spots since May and broke into the top five. Driven by the success of their Skype apps for iPhone and iPad, Microsoft has risen significantly in the iOS App Store revenue ranking for publishers since January.

LINE and GREE held onto their positions as the top two publishers by Google Play monthly revenue for the third straight month. Much of LINE’s and GREE’s non-games revenue were driven by their communication apps, and they were joined by another popular communication platform in the top three, Kakao. The only other publisher besides Kakao to move up the ranking in June was Garmin, who climbed one spot to join TomTom as the second mobile navigation app publisher in the top publishers by non-game revenue in Google Play.

The top non-game apps by downloads for iOS in June continue to be dominated by publishers in the United States, namely Google and Apple, who both published three of the top ten apps. The top half of this ranking is driven by social photo and video apps like Vine, YouTube, Snapchat and Instagram. Vine increased its monthly iOS App Store downloads enough to overtake the #1 position in the ranking and has seen particularly strong growth in the United Kingdom since May: 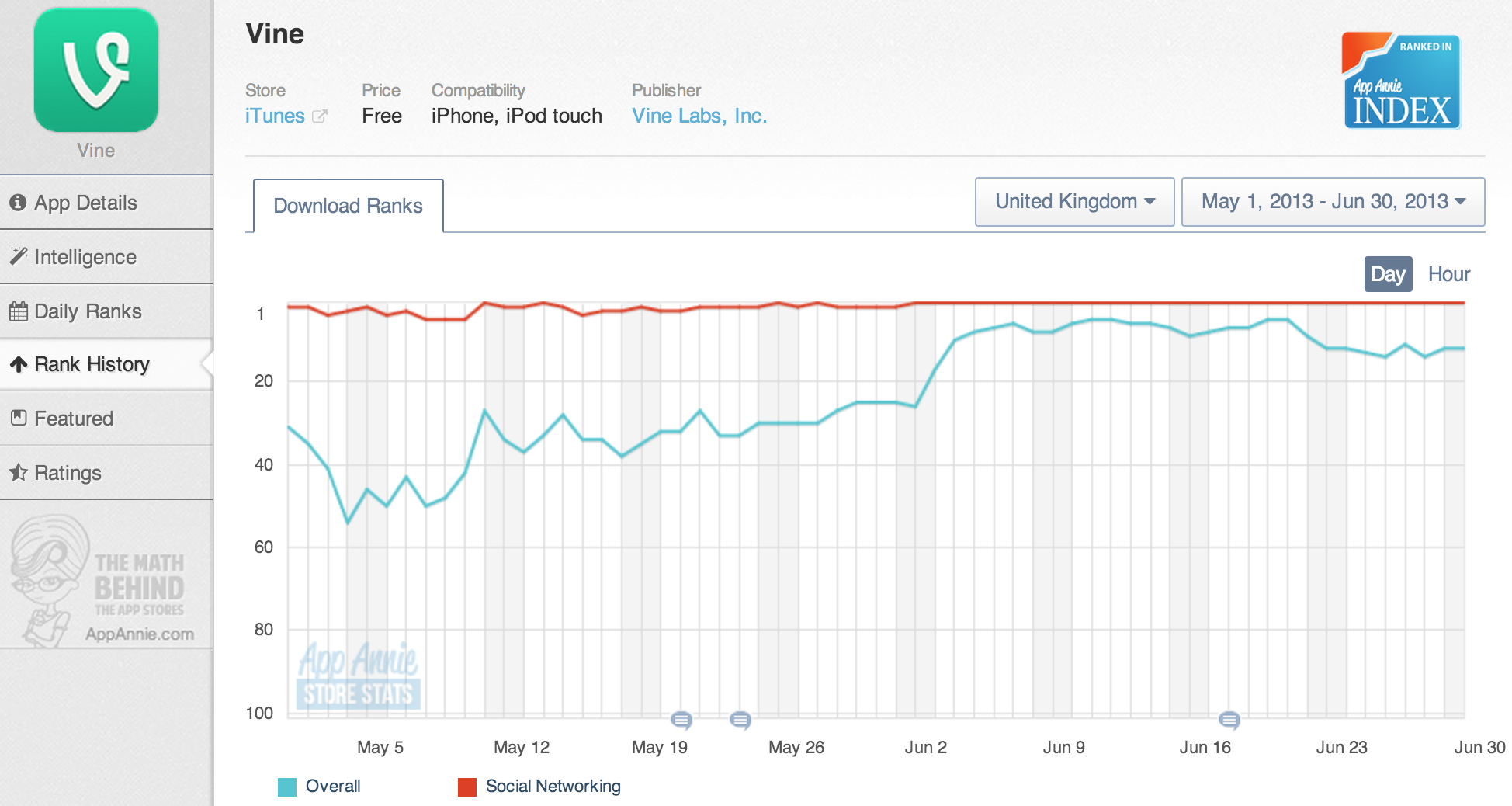 Vine performed particularly well in the United Kingdom in June.

Not to be outdone, Instagram responded to Vine’s growing popularity by introducing its own video feature on June 20th that lets users capture 15-second videos. After Apple featured the updated app on the iTunes Home Page’s Main Banner in 140 countries, it was reported that over five million video clips were uploaded in the first 24 hours. 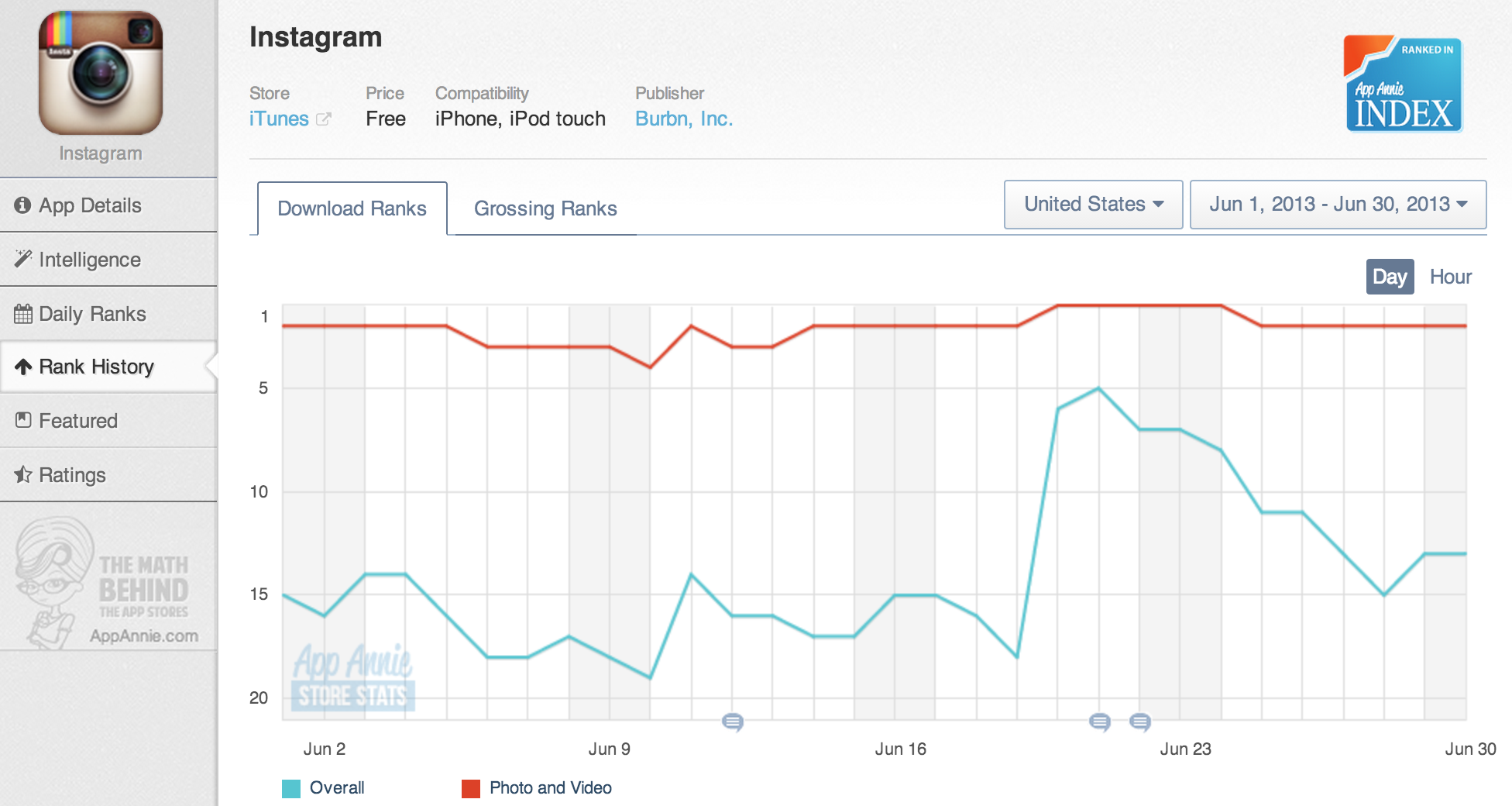 Instagram’s video integration update on June 20 was accompanied by a boost in their rankings.

The big mover in the non-gaming apps by monthly downloads for iOS ranking for June is the Emoji> app. This emoticon-based chatting app developed by South Korean publisher Emoji+ has climbed over forty spots since the beginning of 2013 and ranked #9 rank in June.

The top six non-game apps by downloads in Google Play remained consistent for the second month in a row. Anchored by Facebook and WhatsApp Messenger, which have held the #1 and #2 rank each month in 2013, Social Media and Communication apps dominated the top ten. Tiny Flashlight + LED by Nikolay Ananiev was the only app in the top ten that didn’t fall into either of those categories.

One app quickly climbing the ranks is WeChat, the popular messaging app published by China’s leading Internet service portal Tencent. WeChat has steadily increased their download ranking since February and saw significant growth in Mexico, the Philippines and India that propelled them from #10 in May to #7 in June. WeChat promoted itself particularly aggressively in Spanish-speaking markets, running ads that featured singer-songwriter and actress Belinda in Mexico and Argentina’s Lionel Messi, who won the FIFA World Player of the Year award for the fourth consecutive year in January. 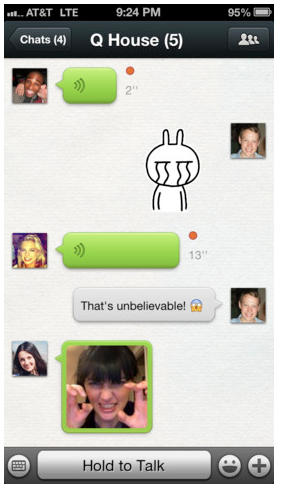 The social networking category continued to dominate the rankings for top non-games by revenue for the iOS App Store, taking six of the top ten spots. The top five apps remained the same for the second consecutive month, with Pandora claiming the top position for the third month in a row on the back of a strong performance in the United States.

Skype rose four spots to land at #6, its highest ranking of 2013. Skype’s growth in June coincided with two announcements made about expanding the platform and implementing new features. First, Microsoft announced that they were connecting Skype with Lync, their unified communication platform for the enterprise that is used by 90 of the Fortune Global 100 companies. Their second announcement featured the integration of video messaging into the Skype experience. Video messages are a free feature implemented across Skype on every device that gave users the ability to record a short video message for contacts that weren’t available for a video chat. 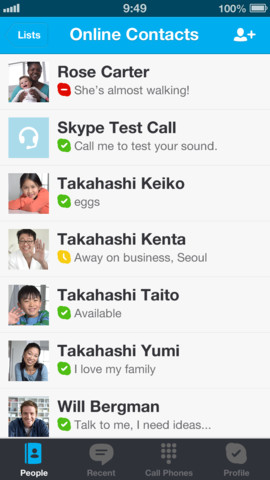 Microsoft added video messaging to Skype and integrated the communication platform into their enterprise product, Lync.

App publishers based in Asia continue to drive non-game revenue generation in Google Play, accounting for six of the top ten publishers. Leading the way for the fourth consecutive month were LINE and GREE at #1 and #2. KakaoTalk, South Korea’s leading social communication and gaming platform, joined LINE and GREE in the top three, giving communication-based apps from Japan and South Korea a clean sweep of the top three highest non-game revenue generating apps in Google Play for the month of June. KakaoTalk also released a PC version on June 20th and later announced that they had surpassed 100 million users at the end of the month. 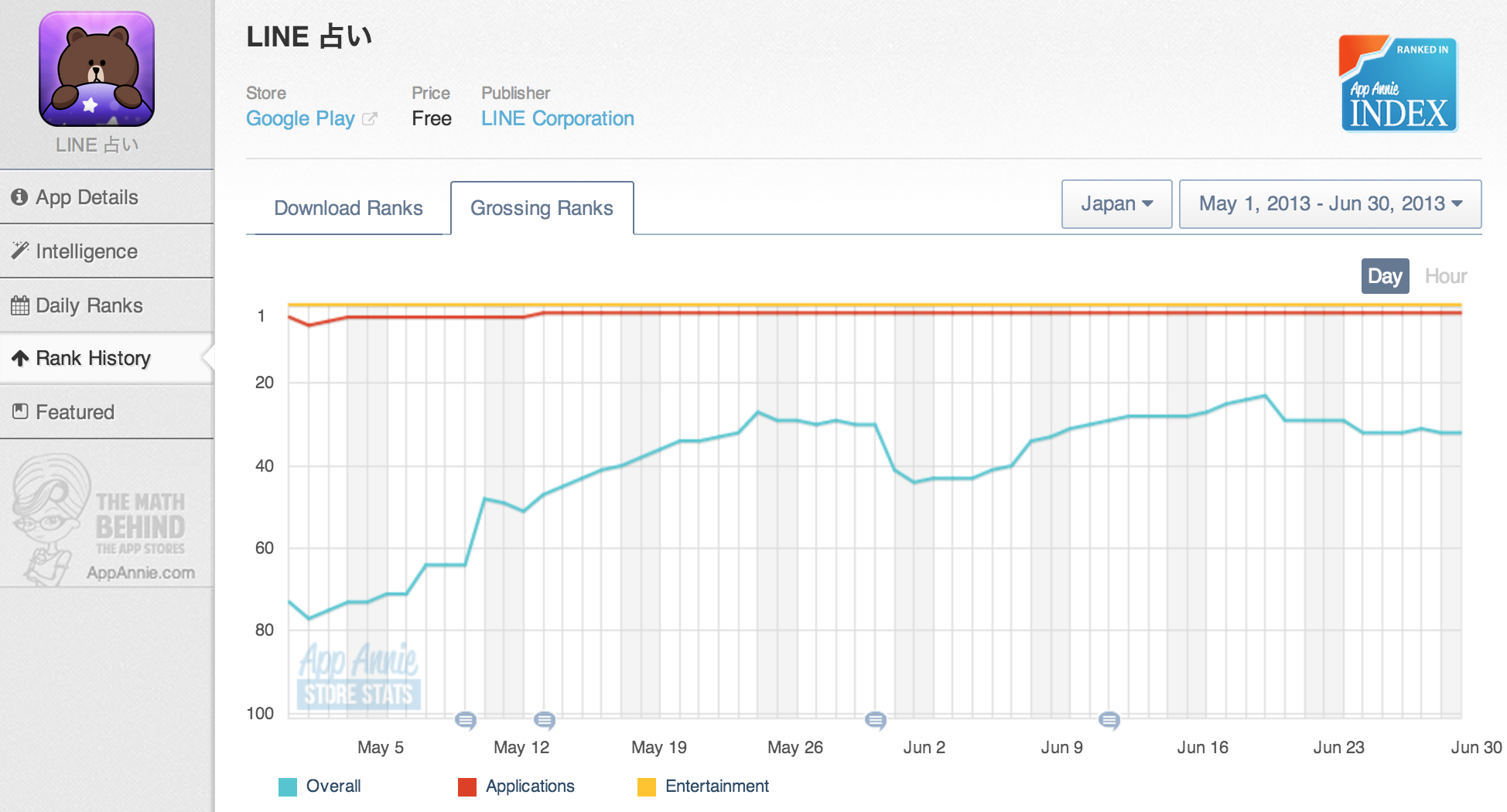 Since May 2013, LINE 占い (Fortune-telling) has been rising in the rankings in Japan.

LINE 占い (Fortune-telling) is an app where users can look up their horoscopes, get their tarot cards read and connect with psychics for personal readings. A third app for the LINE platform that delivers Japanese comics to mobile phones, LINE マンガ (Manga), joined LINE 占い (Fortune-telling) in the top ten revenue generating non-game apps on Google Play in June. This gave the LINE platform its third app in the top non-games by monthly revenue for Google Play ranking. LINE マンガ (Manga)’s rise in the ranks also made June the first month of 2013 to have two comic book apps in the top ten.

SwiftKey reached a milestone in June when they received their 150,000th five-star review, and they celebrated with a 50% off sale for their popular keyboard app. SwiftKey reports that an impressive 77% of the people who review their app gave it five stars and 93% gave it four stars or higher.

For those of you who also are looking for an update on top apps in gaming and the overall market, please check out our June 2013 Games Index and Q2 2013 Market Index.