The App Annie Apps Index brings you the top-performing publishers and apps outside of games across both the iOS App Store and Google Play. To find out what’s happening in game apps, please check out our July 2013 Games Index.

The competition among messenger apps in Google Play has been escalating quickly on an international scale. A recent report from IDC found that quarterly global smartphone shipments increased by over 50% from Q2 2012 to Q2 2013, with close to 80% of those smartphone shipments coming loaded with an Android mobile operating system. Android’s open operating system relieves the software burden from smartphone manufacturers and lets them produce handsets at price points that have worked well in emerging markets. Android’s adoption in emerging markets has created opportunities for publishers to reach new audiences and infused more competition in the Google Play rankings.

One Messenger App to Rule The World

The market for messenger apps on Google Play is overflowing with options. Of the Top 10 downloaded apps on Google Play, six of them are messenger apps and three are social. Some apps let you play games and send stickers to your friends. Some focus on group chats and on helping you avoid advertising. Some started off as online social networks and are shifting their focus to smartphones. Some were originally video conference tools that are trying to develop more nimble and lightweight ways to communicate. Some you’ve never even heard of, but there are millions of people using them around the world. The messenger app space is bubbling over right now, and each publisher is trying to differentiate itself, target an untapped emerging market, and create unique experiences that make users feel like they could never live without their app or the friends they’ve convinced to join them. What is clear is that each of these apps are gunning for at least regional if not global dominance one region at a time, whether through integrating gaming and e-commerce channels or splashing out on TV ad campaigns. Kakao in Japan, LINE in India, WeChat outside China, WhatsApp in Argentina, these apps are battling to be the world's go-to platform for everyone's messages. We send our heartfelt condolences out to good old-fashioned SMS.

Two iOS App Store publishers made big strides to reach the Top 10 in non-game downloads for July. Tap Nation used Screen Lock Free, a lockable folder app, to propel itself to #8 in July. Bin Wang landed at #10 for the month, on the shoulders of their interactive educational app 看图猜成语 (Chengyu Quiz Madness).

After a busy month that saw Baidu announce that their Q2 2013 total revenues were 38.6% higher than the corresponding time period in 2012 and that they signed a Memorandum of Understanding to acquire the Chinese app distribution platform 91 Wireless, Baidu maintained their position as the #4 ranked publisher by non-game downloads for the iOS App Store in June. When asked about their approach to mobile, Mingyuan Li, Vice President and General Manager of the Mobile & Cloud Business Unit at Baidu told App Annie, "Baidu is committed to delivering a top-class service and user experience to its billions of customers. In this mobile era, we've positioned our technologies to be a one-stop solution for over 700,000 developers to build, deploy, promote, operate and monetize their apps. Baidu’s 'mobile search + app store' distribution model is solving the problem of distribution facing long-tail and low-frequency apps. By providing developers with unprecedented support, we are building a mobile ecosystem where everyone can flourish.” 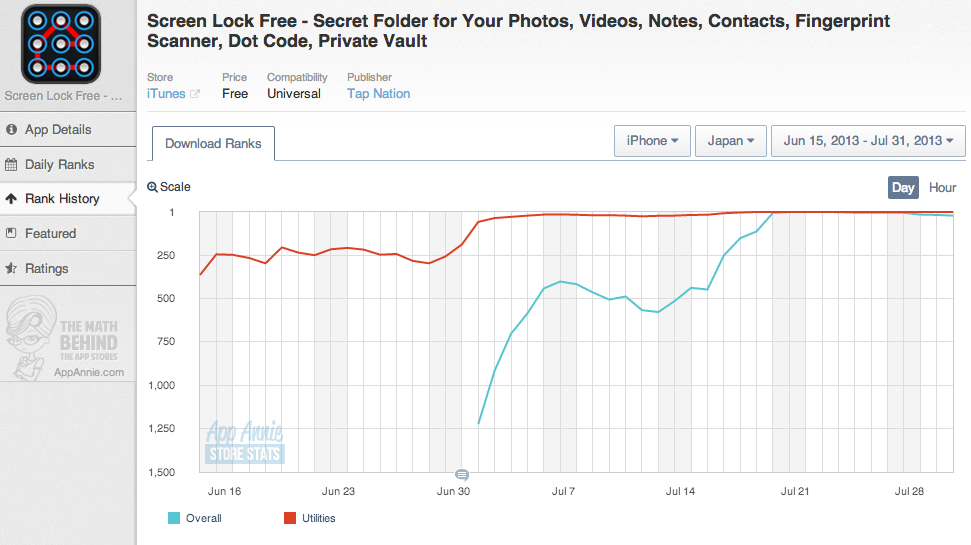 Screen Lock Free made a strong push in Japan in July

Facebook’s #1 publisher ranking for Google Play non-game downloads was driven by the popularity of their main Facebook app, as well as downloads for Instagram and Facebook Messenger. Facebook performed well not only in the United States, but also in emerging markets around the globe.

LINE announced at an August 21st press conference that their messenger app has now reached 230 million users, which includes 47 million in Japan, 18 million in Thailand, 17 million in Taiwan, 15 million in Spain, and 14 million in Indonesia. As a token of their appreciation, LINE announced free sticker giveaways and provided some details on their effort to localize the LINE app for Islamic regions and Indonesia. With Ramadan, the Islamic month of fasting, starting July 8th and ending August 7th, LINE offered special Ramadan-themed stickers to users in Islamic regions. LINE users in Indonesia had the opportunity to buy orangutan stickers with all of the proceeds going to support a fund trying to protect the endangered orangutan from extinction.

Pandora maintained their top position in the rankings for the fourth straight month. To celebrate the fifth year anniversary of the Pandora Radio iPhone app, Pandora shared some statistics they collected over the years. According to the infographic in their blog post, “79% of Pandora listening hours happen on mobile and connected devices.” That translated to 23+ billion hours of Pandora listening on mobile and connected devices.

Garmin climbed eight spots to become the #9 grossing non-game publisher in the iOS App Store in July. In mid-July, Garmin lowered the price on many navigation apps to celebrate summer travel. Two apps that led their rise in the revenue rankings were NAVIGON Europe and NAVIGON select Telekom Edition. The latter was recently updated with Mobile Alert Live, a new service for real-time reporting and receiving locations of speed cameras.

comiXology climbed to the #5 position on the back of their two comics apps, Comics and DC Comics. It was a busy month for comiXology between maintaining a very active presence at Comic-Con in San Diego, the announcement that they surpassed 180 million downloads of comics and graphic novels worldwide, and signing new distribution agreements with Scholastic and Udon Entertainment.

“At comiXology, we aim to see everyone on the planet become a comics fan. It's clear that more and more readers are embracing digital comics,” said David Steinberger, co-founder and CEO of comiXology. "Being ranked 5th in App Annie's Google Play Top Publishers by Revenue chart this July speaks volumes about comiXology's engaging and immersive experience, as well as our outstanding selection of over 40,000 comic books and graphic novels available worldwide."

GREE also announced that they were teaming up with Disney, a top grossing iOS publisher, to launch a new X-Men: Battle of the Atom game. X-Men: Battle of Atom is a card battle game with a narrative tie-in to the X-Men 50th anniversary event that will let players collect cards of their favorite characters and battle friends by themselves or in teams.

Pandora, TomTom, and Garmin were the only publishers in the Top 10 for revenue generation in both the iOS App Store and Google Play.

One of the more unique additions to the Top 10 ranking in July was the educational app 看图猜成语 (Chengyu Quiz Madness) by Bin Wang. The images shown in the app are clues for children in China to test their knowledge of chengyu, which are Chinese idioms derived from ancient literature that are usually four characters long.

WeChat, from Chinese heavyweight Tencent, also broke into the top five in July. Tencent has since updated the app to include a payment system for Chinese users to allow them to expand WeChat into a gaming and e-commerce platform.

Google placed three apps in the Top 10 in July, with Google Earth and Google Maps navigating their way up to #9 and #1, respectively. In late June, Google released major updates to the Google Earth app, including adding and updating 3D imagery across over fifty cities, adding Street View, and improving the interface for directions and search. On July 16th, Google Maps was updated as well to include a new iPad design, enhanced navigation, Zagat rating information, Google Offers integration, and indoor maps. 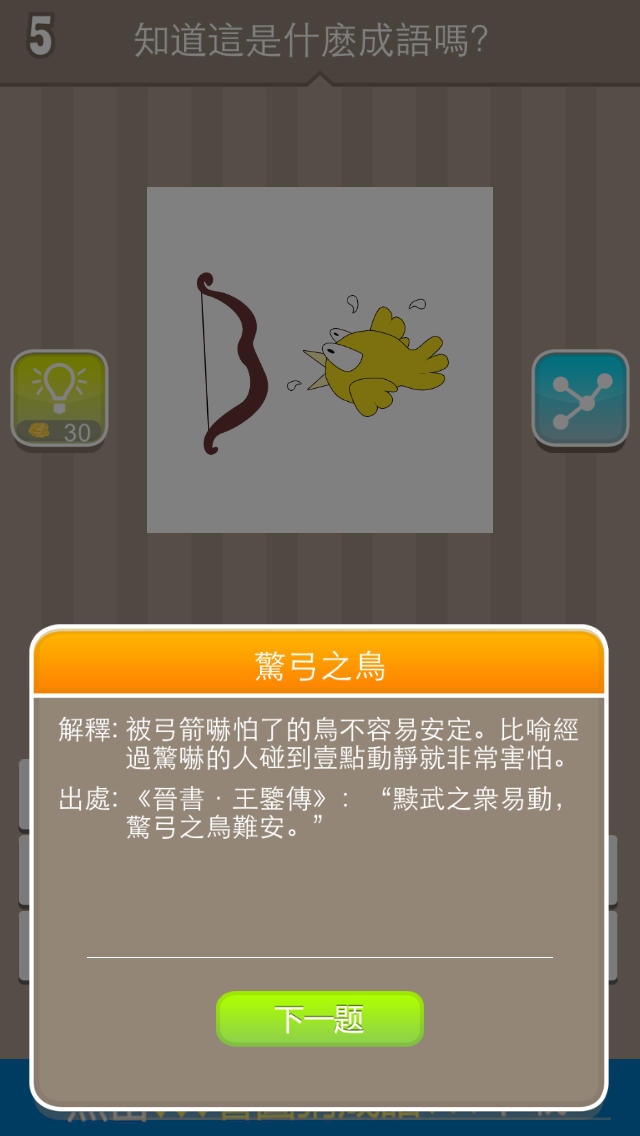 While the iOS App Store non-game download rankings featured a diverse collection of app categories, these Google Play rankings continued to be dominated by communication and social apps in July. J2 Interactive’s MX Player has been the only media & video app to make the monthly Top 10 Google Play non-game app download rankings in 2013.

One of the more consistent trends across the social and communication apps in this month’s Index ranking was that many grew their user bases in emerging markets. Google Play has been particularly poised to capitalize on emerging market opportunities because Android device manufacturers offer handsets that are cheaper for consumers in developing countries to purchase. According to a recent report by IDC, quarterly global smartphone shipments grew over 50% from Q2 2012 to Q2 2013 and Android phones captured close to an 80% share of those shipments. Another study by Canalys looked at Q2 2013 smartphone shipments and found that India emerged as the third largest market for smartphones in the world behind China and the United States. 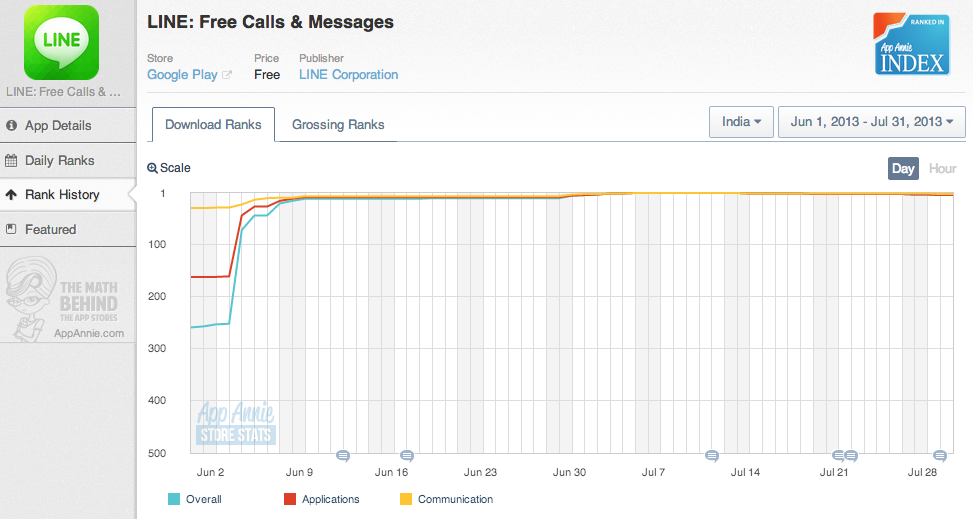 WhatsApp Messenger received an update on July 1st that raised the group chat limit to 50 participants per group, improved the media file integration and automatic download settings, and integrated the Google Maps API that allowed users to share their position. The app’s download rankings improved significantly in Argentina in July: 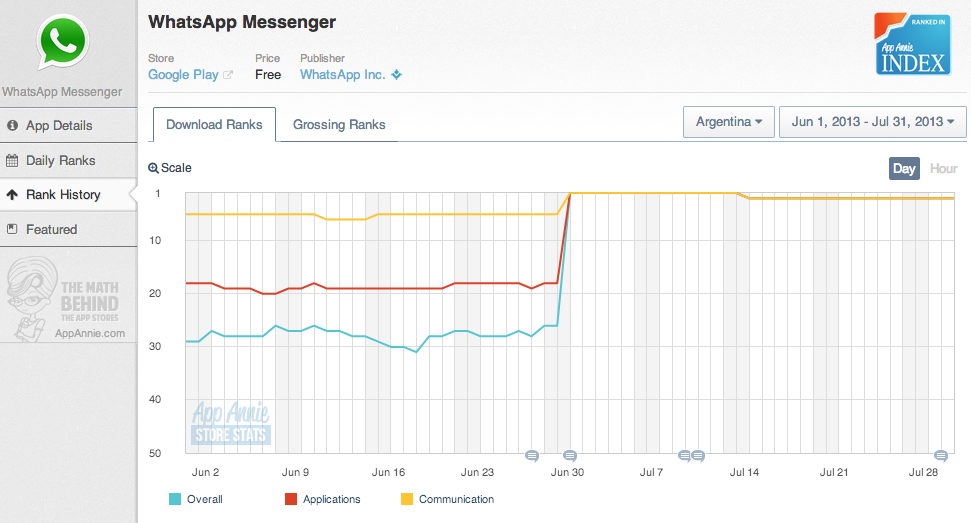 The top grossing non-game apps in the iOS App Store continued to be dominated by the social networking category and by publishers based in the United States. Pandora has held the top spot for four straight months, and although apps have moved up and down within the Top 10, a new app has not broken into the list since May.

Dating apps had a strong presence in the top grossing non-game apps in the iOS App Store, occupying three of the Top 10 spots. Zoosk at #3 and Grindr Xtra at #9 are both published by US-based companies and embraced by English-speaking countries. UK-based Badoo drew a more international crowd, with strong participation from users in Europe. 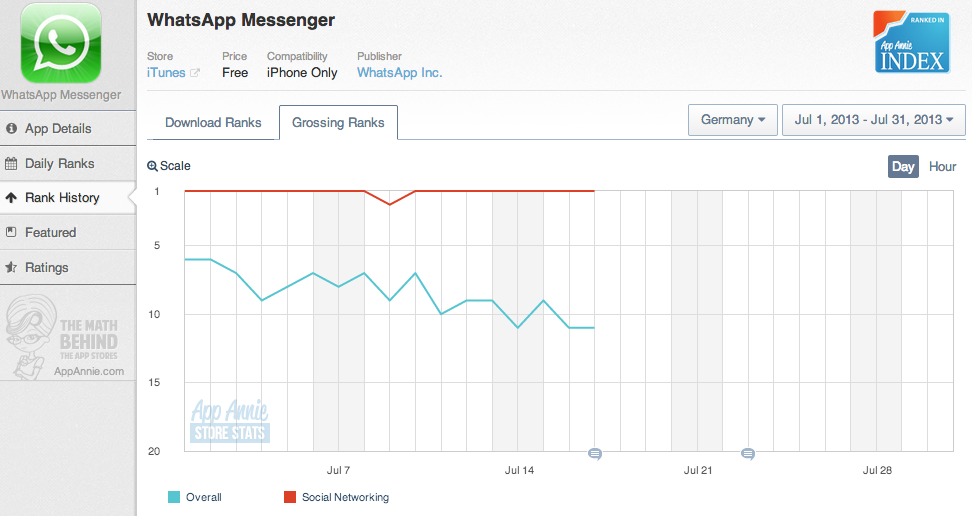 The top six positions in the top apps by Google Play monthly revenue ranking did not change from last month, making July the fifth consecutive month that LINE and GREE have held the #1 and #2 rankings, respectively. According to a recent financial statement, Japan still accounted for 80% of LINE’s revenue, but the communication app was growing its presence in Taiwan and Thailand. The same financial statement also shed some light on the status of LINE’s stamp business model, which grew from $17.9 million (USD) in Q1 2013 to $25.2 million (USD) in Q2 2013. LINE was the only publisher with more than one app in the Top 10, and both LINE 占い (Fortune-telling) and LINE マンガ (Manga) generated nearly all of their revenue within Japan.

KakaoTalk generated most of its revenue from within South Korea, but it has gradually been gaining in revenue outside Korea, particularly in Japan. After striking a deal with Yahoo! Japan in October 2012 to help optimize and promote the app to the Japanese market, KakaoTalk began an aggressive TV ad blitz in December. Then, after a successful international rollout on Android, KakaoTalk extended their gaming platform to iOS devices in Japan.

LINE マンガ (Manga) and comiXology’s Comics were both comic book apps in the Top 10, though they reached very different audiences. Comics has performed well in the United States, whereas LINE マンガ (Manga) earned its revenue in Japan. 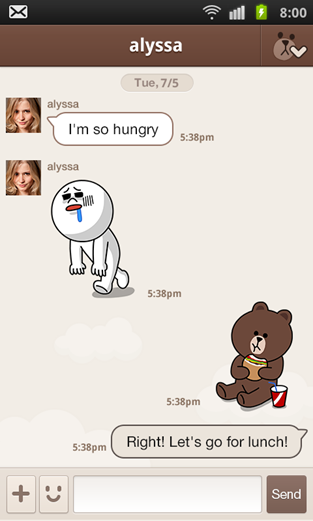 For those of you who also are looking for an update on top apps in gaming, please check out our July 2013 Games Index.