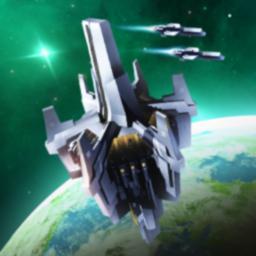 Check out the download rank history for Stellaris: Galaxy Command in United States.

Stellaris, the bestselling Sci-Fi strategy game, is finally on your mobile!

The universe has barely survived an inter-dimensional invasion that devastated vast swaths of the galaxy. The United Nations of Earth requires your assistance and contribution to rebuild galactic civilization. Take control of your own space station and set a course to distant stars! On your way, you will discover new mysteries in the depths of the universe!

Get ready to explore and discover a spectacular and real-time universe, where thousands of players play in a single galaxy with nearly a thousand star systems to explore! Construct your space station, form and join alliances to occupy regions of space together, trade with other players, build-up your own powerful fleet, and wage war against other players in the galaxy!

A new Stellaris experience, exclusive for mobile:
- Stellaris: Galaxy Command extends the Stellaris universe to mobile, putting space strategy and an epic Stellaris story in the palm of your hands.
- Galaxy Command is inspired by many of the features and mechanics of the PC game, with new trading systems, ethics, political systems, and more.
- With gorgeous visuals and aesthetics inspired by the PC game, fans of Stellaris will find familiar characters, graphics, and gameplay.

Forge Your Alliance:
- Work together with your teammates to build an empire.
- Occupy territories, build defensive structures, set tax rates for passing trades, sign trade deals, and even work collectively to colonize planets.
- Declare “cold” or conventional war and claim victory through economic strength or brute military force.
- Convene with allies to form an attack strategy, then wage war on other players across the universe.

Dominate Intergalactic Trade:
- As you progress, and needs of your population grow, their demand will begin to outpace their own ability to produce everything. You will have to specialize your production through research, which means that you will need to trade with one another to meet basic needs.
- Different sectors of space also contain unique and valuable resources—trade networks will naturally emerge, leading to alliances vying over lucrative territories.
- As a player, you can choose to be a pure trader and buy valuable products from afar and sell nearby for profit. You can also specialize in selling specific resources to earn a greater profit. Alternatively, you could simply use auto-trade to satisfy your basic consumption needs automatically.

Construct a Unique Station:
- Create and freely customize the structure of your station, construct unique buildings, and upgrade them.

Make Critical Decisions:
- Experience mysteries and uncover captivating stories through a familiar event chain system.
- Explore event chain systems capable of telling epic and meaningful stories that will influence your ultimate path.
- Many events reference or are a direct continuation of the event chains from the Stellaris PC game.

Design Your Own Fleet:
- Create and modify your fleet design with in-game ship design mode! Upgrade your fleet for maximum power!
- Join real-time battles and reinforce the fleets of your fellow alliance members.
- Recruit elite admirals to join your empire and lead your fleets to victory!

Features:
- Open world, strategy MMO based on a bestselling Sci-Fi strategy game
- Iconic Stellaris ships and mechanics
- Become a leader or member of an Alliance
- Control Trade Networks
- Customize your spaceships to upgrade power
- Battle with other players all over the galaxy
- Breathtaking sci-fi music
- Generous rewards for missions and quests
- Excellent 3D graphics and beautiful galaxies to explore
- This game is designed for mobile and is free to download.

Find out what users think of Stellaris: Galaxy Command by reading the reviews and checking the rating.

Hi! Stellaris PC player here. It may be old news, but this? This ain’t the same Stellaris. This is just a reskin for Nova Empire. Paradox, dear, what went wrong?

A horrible ripoff of stellaris

Rampant Cheating Ruins It All

A potentially fun game set in the amazing Stellaris universe. The game mechanisms are fun and well thought out, even if the in game explanations are somewhat lacking. Regardless, the any value the game may have is wasted by the rampant ingame cheating which the developer either refuses to or is inca…