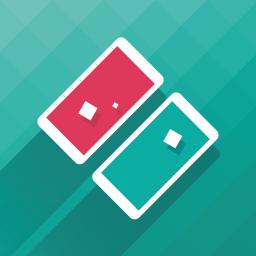 Check out the download rank history for DUAL! in United States.

Rank History shows how popular DUAL! is in the iOS, and how that’s changed over time. You can track the performance of DUAL! every hour of every day across different countries, categories and devices.

Between people, across screens.

DUAL is a local multiplayer game where two players use their mobile devices to shoot from one screen to the other. It's easy to pick up and play any of the competitive or cooperative modes: DUEL, DEFLECT, and DEFEND.

Features:
+ Battle locally over WiFi or Bluetooth.
+ DUEL - Tilt your phone, dodge bullets, charge, and shoot your friends in this classic duel standoff.
+ DEFEND - Work together to defend the middle from an onslaught of attackers.
+ DEFLECT - Score goals by blasting, banking, and curving the ball from one screen to the other.
+ Only one person needs to have the full version unlocked to play DEFEND and DEFLECT with another player.
+ Collectable color sets unique to your device; unlock them all by playing against different people.
+ Single one-time in-app purchase to unlock the full game, and restore it on all your devices using the same account.
+ Stats, achievements, and leaderboards.

"Working together right next to each other really brings back the magic of couch gaming."
- Chris Carter, Destructoid

"...it's a really fun way to engage with another live human, up-close and personal."
- Rick Broida, CNET

"You play it with someone, anywhere, and it actually brings you closer together..."
- Chris Priestman, Kill Screen

"...sending bullets across to someone else’s phone as you sit opposite them has a curious sense of technological magic to it."
- Chris Charlton, Kaijupop

Find out what users think of DUAL! by reading the reviews and checking the rating.

The game is very fun but there shoul be a mode to play with npcs and the bad thing is that after 3 plays you have to watch adds to play again or pay $3.00 for the full game that’s boring you guys should make the game full

Does not work on iPhone 13