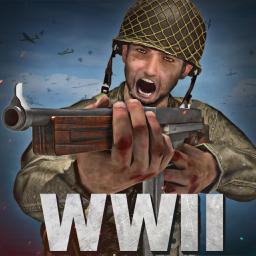 Check out the download rank history for Call of Army WW2 Shooter Game in United States.

The city is ruined and occupied in an epic World War 2 (WWII). The Army has sent the brave first-person shooter (fps) soldier to win this call of world war. Call of Army WW2 Shooter is a ww2 fps war game, in which your duty is to kill all the enemy soldiers in order to defend your country's territory while capturing the enemy soldier’s camps and bases in this epic World War 2 (WWII) duty mission.

Are you in for free offline shooting games? Have you played ww2 games or battle games? I take that as a yes, you will love this WW2 army Commando shooting game. Fight in this mad world war ii game with army squads. This is the best in first-person shooter offline ww2 shooter games 2021 with role-playing strategies.

Call of the country demands their frontline heroes to fight strongly against these foolish enemies and end this war by killing the enemies and saving the hostages. Military games require the aiming skills of the firing squad which matter the most. Call of Army WW2 Shooter is full of action, adventure and surprises. Free games lover we offer you, ww2 shooter, a free offline shooting game.

The Call of Army Battle WWII has 24 different chapters to experience WW2. But you must complete each sensitive task to move on to the next mission. Each new mission will feature a different assignment with a larger number of enemies to challenge the player.

Call Of Army WW2 battlefield war game has 2 two modes of gameplay: beginner and advanced. Advanced offline action games are designed for hardcore players and skilled users. You can train yourself as a beginner and switch to an advanced level at any time. Our world war game is non-compatible in WW2 action games 2021 & offline shooting games 2021.

Find out what users think of Call of Army WW2 Shooter Game by reading the reviews and checking the rating.