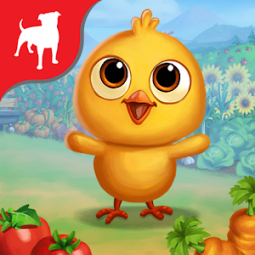 Check out the download rank history for FarmVille 2: Country Escape in United States.

Escape to the world of farming, friends and fun! Go on farm adventures to collect rare goods and craft new recipes. Raise animals and grow your farm with friends. Join a farm Co-Op to trade and share or play on your own in Anonymous Mode. You can play FarmVille anytime, anywhere… even when not connected to the internet. Best of all, the world’s most popular farming game is free to play!
** ”FarmVille is back and this time, it’s portable!” – TIME **
** “”Officially not just for Facebook anymore”” – Los Angeles Times **
** “” They may have built the best FarmVille game of the series”” – Kotaku **
- CRAFT a variety of baked gourmet goods like classic country apple pies
- HARVEST farm fresh crops of your favorite fruits and vegetables
- CUSTOMIZE your own farm for charming country living
- COLLECT hidden and rare items as you discover a new coastal farm
- NURTURE and raise a wide variety of adorable animals like your very own farm dog
- EXPLORE a new FarmVille story filled with special farm adventures
- BUILD a lush family farm by the coast so all your friends can visit
- GARDEN by the beautiful blue ocean as you decorate your farm with flowers and fresh produce
- TRADE and chat with friends or play anonymously with people from all over the world
- ESCAPE to the coast then connect to your Facebook farm to send free water
- EARN daily rewards with the Mystery Chest and take a spin at the Prize Wheel”
Additional information:
• The game is free to play; however, in-app purchases are available for additional content and in-game currency.
• Use of this application is governed by Zynga’s Terms of Service, found at www.zynga.com/legal/terms-of-service.
• For information about how Zynga uses personal data, please read our privacy policy at http://www.zynga.com/privacy/policy.

FarmVille 2: Country Escape was featured in Google Play on 3 placements in United States on Aug 14, 2018.

Also featured in 10 other countries, and probably even more in the past.

Find out what users think of FarmVille 2: Country Escape by reading the reviews and checking the rating.

It is a fun game until something goes wrong. When that happens you can not get help from zynga or play store. My game has frozen stars for weeks, and now I can not get refill on fertilizer for cranberries etc. They tell you to update in cloud, I wish I knew where this elusive cloud might be. And now…

I'm still giving a five star because earlier versions where awesome... But now I can't empty my full storage, constantly freezes, constantly crashes and won't let me connect to Facebook.. awesome game... But current version is not helping me to play and enjoy... Uninstalled temporary until the issue…