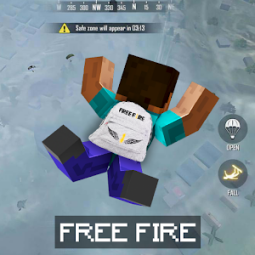 Mod FreeFire is a popular online shooter which now can be played in Minecraft PE. This map recreates the original gameplay of the FF fire Battle Royale mode, which implies looting of the chests and PvP. You need two or more players to start the game, the one who survives is the winner. Map modifies some in-game items, to make them look like and behave in the way of the original game.

This app will download and install mod Free fire for Minecraft PE with just some steps. Automatically play this mod with one-click button, This addon adds some of the iconic vehicles from the famous battle royale game PlayerUnknown's BattleGrounds or garena ff fire mcpe, an amazing mod and addon is perfect for large PvP maps especially for Battle Royale Maps available for Minecraft Bedrock Edition.


Mod Free fire Warfare is yet another addon for MCPE featuring modern guns and explosives. The models of the actual weapons are 3D and low-poly but well animated. Fire Guns have unique animations and recoil that depend on the caliber of the ammo used. Sounds are pretty authentic, as far I can say, and slightly loud. If you want to aim precisely, you can use a guns' scope, just like was shown on the GIF below. Altogether, there will be 32 guns added to the game.
I bet you've heard about Apex mcpe Legends, well now, three guns from that game can be in your Minecraft. Every weapon suits best only for some situations on the battlefield. Switch between guns to max out your damage output. You don't need to craft ammo for these guns - only reload in time.


Stop using medieval ways of killing mobs, it is time for modern FreeFire weapons in Minecraft PE. All guns are very effective against mobs in the game, though it may be dangerous to use them if you're not careful. It's not any close to the mod, but unlike mentioned above, it's an addon and will work on iOS. There is also a bug with mines (creeper), they're working as expected only a few seconds after placement, after that they're just laying around.

DISCLAIMER
This application is not affiliated in any way with Mojang AB.
The Minecraft Name, Brand and the Minecraft Assets are all property of Mojang AB or their respectful owner.
All rights reserved. In accordance with http://account.mojang.com/documents/brand_guidelines

Find out what users think of MOD FF Fire Battle Max Minecraft Maps Master Mods by reading the reviews and checking the rating.