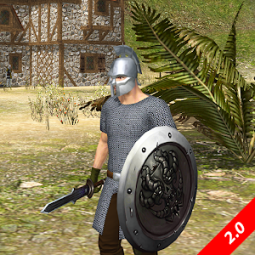 Check out the download rank history for World Of Rest: Online RPG in United States.

World Of Rest is a multi-player role-playing online game in fantasy genre. Its character has to conquer new space and perform feats to protect his city. Step by step, hit by hit, he becomes more dangerous for his enemies and more and more out of reach for his opponents.

An exciting travelling across the varied World Of Rest will give you a real joy. Your character will fight with different monsters, from wolves to minotaurs and dragons using both his weapon, and magic. He will establish order on islands and in vaults, in deserts and jungles, on the plains and in the mountains, using force and sharpness of mind. The trophies obtained in the battles will give your character money so that he could buy new ammunition.

Hundreds of opportunities for becoming the best

We suggest your character mastering additional set of trades: a hunter, a fisherman, an herbalist, an alchemist, a blacksmith. There are almost no limits for improving your skills. With every won level, your character gets access to new types of weapon, armour and magical objects.
If you wish, you can buy game coins for real money. It will instantly speed up achievement of the game purposes. As for the rest, the game is completely free.

Beat your opponents and make friends

As you play, you can see other users' weapon and their ammunition. Compete with them, trying to excel them by all parameters or build a team to beat the monsters. Invite your friends and make new ones via the chat. It is much more interesting to discover the unknown together.

Everything to the user's comfort

The player gets easily accustomed to the magic world thanks to intuitive controls. A detailed map makes the orientation easier. The score of victories and defeats, as well as a lot of other useful information about your character, is available if you click his icon.
If you quit the game, it is saved automatically. Next time, you will start exactly where you finished.

Become the best protector of the World Of Rest!

Note:
The game is in the stage of early access (active stage of revision and improvement). Your suggestions on the development are welcome!

Find out what users think of World Of Rest: Online RPG by reading the reviews and checking the rating.

I can't play this game this games language is rassian and I want to chang the language but I can't chang.

My game is not installing