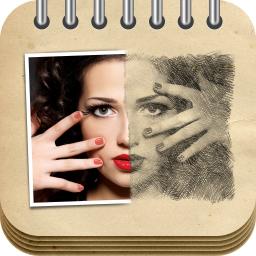 PicSketch is the most powerful photo sketch software, with which anyone can easily turn photo to sketch in just a few mouse clicks. Not too much drawing knowledge? It is OK with this photo sketch app, you will be amazed by your picture sketch.

Aiming to be a professional sketch software, PicSketch offers basis editing tools, such as rotate, adjust contrast and brightness, change photo sketch background. You can even choose a pencil sketch effects from the preset pencil drawing styles. In a word, you totally personalize your picture sketch.

• Easy and quickly turn photo into sketch
First, import photo you need to convert to sketch from your photo album. Second, apply sketch effect on photo. Finally, save finished photo sketch as image.
Of course, you can also edit photo to sketch in your own way, like changing pen color, sketch background, adjust contrast and brightness, and more.

• Various preset sketch effects / styles
In Preset board, 15 specially prepared pencil sketches styles are available. You can choose one of them and apply on your photo. Giving your photo a sense of pencil drawing can't be easer. There are the best styles and work well for any kind of photo.
Plus, you can freely adjust photo sketch contrast, brightness and alpha if neccesary. It gives you every aspeck to control your photo sketch.

• Save picture sketch
When you finish your photo to sketch, just export it as image. PicSketch supports the three photo image formats: JPG, TIFF and PNG.
Sure, you won't let such a good chance miss out to show how awesome your sketch masterpiece is. So you can share your picture sketch on Facebook, Twitter, Pinterest. Or set it as your avatar. Beside, to print out and frame it also is a good idea.