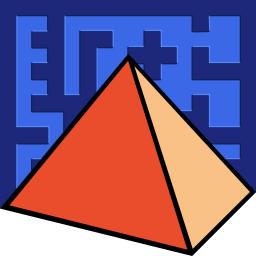 In August of 1993, Bungie Software released Pathways into Darkness the most advanced and ground breaking First Person Shooter for the Macintosh.

The game broke new ground combining Adventure gameplay with the new First Person Shooter game that was just emerging onto the scene. As time passed, the Macintosh hardware and software changed and the game Pathways into Darkness was no longer playable on a modern computer… Until Now.

Painstakingly recreated and updated for OS X, Pathways into Darkness is now free and available for ancient grizzled fans and newcomers to the series.

Sixty-four million years ago, a large extra-terrestrial object struck the Earth in what would later be called the Yucatan Peninsula, in southeastern Mexico. The dust and rock thrown up by the resulting explosion caused enormous climactic changes in the ensuing years, and many of the Earth's species became extinct during the long winter that followed.

The object itself was buried thousands of feet below ground, its nearly two kilometer length remarkably intact. It remained there, motionless, for thousands of years before it finally began to stir- and to dream. It was a member of a race whose history began when the Milky Way was still a formless collection of dust and gas- a powerful race of immortals which had quickly grown bored of their tiny universe and nearly exterminated themselves in war.
This particular being, whose name no human throat will ever learn to pronounce, was part of the cataclysmic battle that formed Magellanic Clouds, billions of years ago. It died there, or it came as close to dying as these things can, and drifted aimlessly for millions of light years before striking the Earth.
The heat of impact liquefied the rock around it, which later cooled and encased the dead god's huge body far below ground. As it began to dream, it wrought unintentional changes in its environment. Locked deep beneath the Earth, strange and unbelievable things faded in and out of reality. Vast caverns and landscapes bubbled to life within the rock, populated by horrible manifestations of the dead god's dream.

Only during the last few centuries has the god begun to effect changes on the surface of the Earth. Grotesque creatures have been sighted deep in the trackless forest of the Yucatan, and strange rumors of an ancient pyramid- which is neither Aztec nor Mayan- in the same area have been circulating in the archaeological community since the early 1930's.

The god is awakening.
It is up to you to prevent the sleeping god from waking up by detonating a low-yield nuclear weapon. Unfortunately things don't go quite as planned. During the jump from the C-151 your primary parachute fails, and you are able to pull the reserve only moments before crashing through the forest canopy toward the ground.

Two hours later you awake, unharmed except for a few bruises, to realize that most of your equipment is missing or damaged (fortunately someone else jumped with the nuclear device). The muzzle of your M-16 is bent just enough to render it useless, and the bag holding the spare clips for your Colt .45 is lost in the deep jungle underbrush. About the only things which didn't break were your flashlight and survival knife.

You finally reach the pyramid, by foot, at a little after 0600 (6:00 AM). The rest of your team must have entered nearly four hours ago. Armed only with a knife, and the knowledge contained in this briefing, you follow them ...