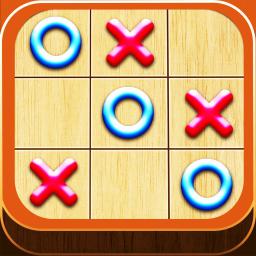 Tic tac toe (or Noughts and crosses, Xs and Os) is a paper-and-pencil game for two players, X and O, who take turns marking the spaces in a 3×3 grid. The player who succeeds in placing three respective marks in a horizontal, vertical, or diagonal row wins the game.

The first player has 3 possible positions (corner, edge, or center) to mark during the first turn. First player can win or force a draw from any of these starting marks; however, playing the corner gives the opponent the smallest choice of squares which must be played to avoid losing.
The second player must respond to the first player opening mark in such a way as to avoid the forced win.

It supports one player (with computer) and two players, so you can play against your friends.

“ONE PLAYER Mode” has three difficulty：
- Easy: AI move random at any positon
- Medium: AI can defend and check two-three in 9 Grids
- Hard can defend and offend! Be careful!

If you have any suggestions, Send a mail to lioninc@qq.com！