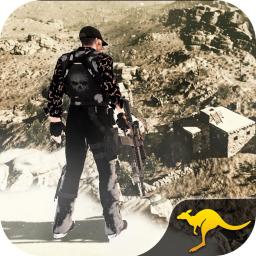 At a hot and arid desert, in a singing atmosphere with wind and sand grains blowing, are you ready to attack terrorist base camp and be the ultimate desert sniper!
A big daring mission is in front of you, Attack the terrorist base camp with your deadly sniper rifle. You are appointed with different critical ops at each stage to destroy terrorist objectives with a killer strike and to prevent terrorist occupy strategic positions in this illegal invasion. So manage strike wisely and the strategy should be spot on according to each operation. That would make it one of the best sniper games out of all sniper shooting games.
In case if you fail as invisible desert sniper, then these ruthless terrorists would carry on with their invasion, through their modern warfare style and their gunner are specialist in modern strike from long distances. Being an ultimate desert sniper analyze their strength and weakness first (which is mentioned for you in each mission for you as sniper shooter). You know what to do as your expertise are in sniper shooting in this wild desert.
There’s no turning back in this critical ops, so let the ruthless onslaught begin. Make sure you keep yourself well focused and determined before firing your first shot and get rid of the terrorists illegal invasion.
Wish you all the good luck that you would surely need for these operations.

How to Play:
1. Touch and move the screen to aim the insane enemy.
2. Scope will help you detecting your objective.
3. The enemy will not attack, until you fire your first shot.
4. Use your Sniper scope to aim at enemies from a distance.
5. Use fire button to shoot.
6. Aim for the head shoot once and accurately, to stay away from their onslaught.
7. The gun reloads automatically.
8. Zoom in to kill the enemy and then zoom out.
9. Read the mission objective carefully.