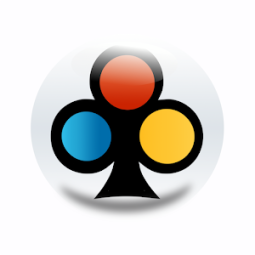 Klaverjassen is one of the most popular card games in the Netherlands, traditionally played in cafes and social clubs, as well as at home. The game is for 4 players who play in pairs, sitting opposite each other. The game has a number of variants, named after the cities where they originated: Amsterdam and Rotterdam.

The object of the game is to score as many points as possible in 16 hands. In competition games the players on one table will rotate so as to have had each of the other three as a partner, so playing 3 sets of 16 hands.

In each hand the object of the game is for the player (and partner) who chooses trumps to collect more than half of the available points. If they fail to do this then they score nothing at all and the opposing pair receives all of the points.

Points are collected by taking tricks containing valuable cards, and also as bonus points during the play.


This game is also know (in slightly different variants) as: Baloot, Pilotta, Belotte or Bela.