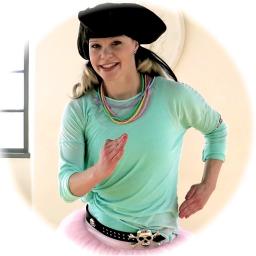 The dance moves are made for children around 2-7 years old, the dances are named after words that children recognize.

As an adult you can say the dance titles the first few times, ”this is the butterfly dance” for example.

Your child will soon know all the titles and will probably find some favorite dances, and they might vary over time.

The Pirate Sessa kids dance concept is made to do at home in the living room, at the birthday party or in pre-school.

The dances in ”Pirate Sessa in the Castle” are inspired by the butterfly, police car, robot, airplane, horse, tiger, frog, scissors and bear. Video and music for each track.

Dance number 10 is freeze dance, which is popular with many children, built-in pauses in the music makes it easy to do dance and freeze – again and again.

Mirror and mimic = just follow along
The basic idea with the Pirate Sessa kids dance concept is to stimulate children’s creativity, musicality and motor skills with the joy of movement and imagination.

To inspire children to get moving and use their bodies in a fun and natural way.

It’s easy to get started, just press play. The child will soon begin to do the moves in its own way. At first, he or she might be sitting and watching, it’s totally okay. Its common to sit and watch the first times, and sooner or later start moving and try to follow along.

It is not necessary to do the moves exactly like the Pirate Sessa, therefore no verbal instructions.
Kids understand what it is about anyway.

The teaching method is called mirroring – watch and imitate. Children learn a lot by watching and doing.

Dance solo or together
Most kids love to dance, boys and girls and the activity is as much fun alone as with others. Dance can be done in many ways, the most important thing is to let small children dance the way they want to, without anyone judging.

The moves are designed to be performed in different ways, this way a 2 year old can do the dances together with a 4 year old and they both have fun and feel successful.

A healthy fun way to move the body
The human body is designed to be moving in natural ways. Today’s children are sitting still more and more and the Pirate Sessa’s kids dance concept is a great contrast.

Movement to music develops coordination and sense of rhythm. This in turn can be used in almost all sports, football for example. To kick or head a ball in the right direction at the right time requires both coordination and rhythm.

Dancing as a child boosts self-esteem and increases the chance to dare to move to music even as a teenager and adult.

So - there are no demands
Pirate Sessa advises parents and other adults to let the dancing child develop the moves at its own pace and in its own way.

It does not matter if the child is flapping his arms forward instead of backward – the important thing is that the child has fun!

Anyone dancing is allowed to do their own versions of the moves and dance without anyone judging.

The way in which the child dances and think is fun – is the right way.

Growing up with an active lifestyle
Embracing a healthy lifestyle at an early age provides a great foundation for a healthy life.
Introducing healthy habits in a fun, playful way increases the possibility of your child to develop a positive attitude to exercise.

Chances are that the movement becomes a natural part of life - forever!