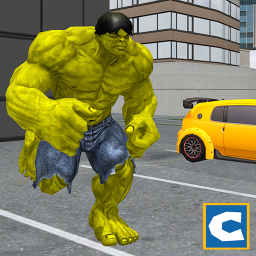 Be a Monster Hero in City Battle to fight as legend hero - what should you do if your city had been attacked by most dangerous criminals and mafia? Get ready for the battle against criminals and mafia. You play as a Monster Hero with amazing power skills where Monster Hero fights and catch the gangsters, drug dealers, mafia and criminals.Evil terrorist villains have again attacked your city with a plan of overtaking it. Try yourself in the role of a City Hero in a dynamic simulator. Your big hunk Hero drives the car to chase the criminals and taken to the police station. Monster Hero fights against mutant crime in final battle .Protect your city from a sinister and exponential evil.Would you be able to defeat these super villains?
Future fight against Super villains ,your Monster Hero has special powers for destruction.Only you will be able to protect civilians and save the vice city. Use all your fighting skills with fantastic power and strategy. Become a defender of the law and defend the common people .Crush and smash everything in its path and become a Monster Hero of City Battle.Remember, your enemies are mortal. It is a new Monster Hero game where Champion is the cause for justice and your future. Monster Hero saves people and city .The strange monster mutant superhero legend is known for its strange supernatural super powers and is ready to hit the road to take down the bad guys.
Gameplay
Follow the story and accomplish all the missions on your way. The more missions completed, the more energy you have to fight against gangsters and criminals. Mafia sells drug to innocent citizens with the power of greed and guns, so you will stop unpleasant activity. Different places of the city town, you will stop the dealing with mafia and gangsters. Drift your super fast sports car in this fast paced avenger hero game with a twist of smashing everyhting. Being last hope of humanity Hunk hero legend has always served this metropolis city in the dark nights with its mutant powers.Be the real time hero in this final battle!
Features
Introduce the new action Hero as a Monster Hero in City Battle.
Super fight with various combination of strokes.
Your Monster Hero drives the car and catch criminals.
Fight against bad guys in this amazing action game.
Fun and easy control while you are playing.
Exciting missions is waiting for you.
This is new episode of Monster Hero in final battle game. Ride on your iron bat ride to take on the most dangerous villains and monsters .Be a legendary warrior, a true super hero against gun shooters in Hunk City Hero. Counter the enemy attacks but do not allow the enemy to counter yours or strike back. Finally you will stop all the crimes in city. Play in single game modes, put yourself to the test and see how far you can go!Become the most courageous and fearless hero! We’ll appreciate for your feedback & rating :)