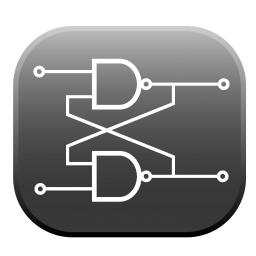 DCircuit Lab is a tool for simulating combinatorial and sequential digital circuits.

Circuits can be simulated in two ways:

1) one single step: all the outputs values are evaluated at the same time

2) step by step: outputs and gates are evaluated one step a time. This shows how each gate's output changes and how changes propagate through the circuit. This feature is very useful to understand complex circuits behavior.
At the end of eache simulation step, each gate may have a different color:

At the end of the simulation, each wire's color corresponds to the digital value carried on itself: red for 1 and gray for 0 and light gray for undefined value.

If circuit contains clock inputs, it's simulation is dynamic. This means that outputs change accordingly to the clocks. During this dynamic simulation, user can change inputs values to study the circuit behavior. Once the simulation is stopped, a circuit timing chart is available.

Many more components are planned to be added soon.