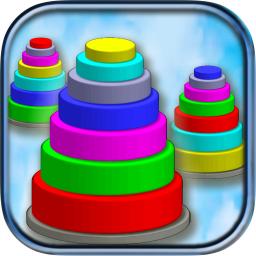 Test your intelligence by playing Towers of Hanoi.
The game consists in changing the discs tower 1 to tower 3 on the condition that you can not move more than one disc at a time, and can not put a large disk on a small one.

- Only one disk can be moved at a time.
- Each move consists of taking the upper disk from one of the stacks and placing it on top of another stack
- No disk may be placed on top of a smaller disk.