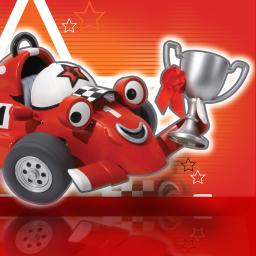 Number 8 in Top Kids Paid Apps in the UK and Finland.

Have your kids ever wanted to be just like Roary - the Number One Star?

Well now they can be - as Roary The Racing Car makes his debut on the iPhone, iPad and iPod touch in "Rollin' Road".

Featuring voices (including Peter Kay) and music from the show and graphics rendered from the actual 3D models used to create the fabulous CGI for the hit children's tv series.

This simple, yet fast paced, action racing game will entertain and challenge the kids for hours, keeping them quiet on those long journeys, as they attempt to beat their own scores and get into the on-line high score table.

They'll also be able to sing-a-long with the Roary theme tune as they settle down for just one more go! The simple game mechanic makes this one of the easiest games to play on the iPhone, iPad and iPod touch, so even your youngest can enjoy the fun!

All the main cars are here Roary, Cici, Maxi, Tin Top, Drifter, Plugger, and they speak too, bringing the tv show to right into your kids hands, in a way never done before.

Other Silverhatch pals include James, Nick, Breeze and even recent arrival Conrod. Hellie keeps Roary supplied with spanners to fix damage and a driving remix of the theme tune plays along providing the atmosphere of an all out race to the finish.

Keep Roary out of the pits as long as you can and if you want, submit your score to the on-line high score table for keeps.

Brilliant fun for kids of all ages!